I received a note that 2004 Olympian Kamara James passed away recently. Eric Rosenberg wrote this piece to honor her memory. Please excuse the formatting as I haven’t had time to look for photos or other references.

It is with deep sadness that I inform the fencing community of the untimely passing of Kamara Latoya James.
Throughout her life, Kamara continually overcame seemingly insurmountable obstacles to achieve successes and accomplishments that few could even dare to dream. In and of themselves, her athletic achievements rank her among the elite in US women’s epee. She won several Junior Olympic and National titles, and a bronze medal at the 2003 Junior World Championships. But the capstone of her career occurred at age 19, when she earned a spot on the 2004 Olympic team – the only U.S. woman to qualify in that weapon.

Initially, I thought Kamara’s Olympic aspirations unrealistic, and tried to manage her expectations. She was too young and lacked the requisite competitive experience as well as adequate financial and coaching support. In response, she self-financed her training and travel to World Cups by single handedly raising $50,000. Still, throughout the qualification process, she was competing against the best in the world largely without the benefit of a strip coach or even teammates to buttress her efforts. Yet, despite these disadvantages, she managed to win a bronze medal at the 2004 World Cup in Katowice, Poland. While recounting the event, Kamara told me that during the quarterfinal bout, her weapon had registered a touch when none had been scored. She freely acknowledged this malfunction to the referee. Kamara never expected – or wanted – anything she did not legitimately earn. Such integrity, intelligence, self-reliance and sheer grit earned her the respect and admiration of teammates and opponents alike.

Fencing is only one aspect of her remarkable curriculum vitae. Born in the hardscrabble city of Kingston, Jamaica, Kamara was primarily raised by her grandmother. She came to the US to live with her mother in the impoverished St Albans section of Queens, NY, an acknowledged epicenter of violent crime and drug gang activity. Yet while the neighborhood school she initially attended reflected those pernicious conditions, Kamara‘s academic performance earned her admission to the elite Lab School in Manhattan. From there, she was awarded a full scholarship to The Dwight School. Graduating among the top in her class, she earned special recognition for writing and athletics. Kamara was an extraordinarily gifted writer. Her lyrical prose – informed by so much tragic and triumphant life experience – was powerful and compelling. I always believed she had the potential to become the next Toni Morrison. Without the help of tutors, Kamara earned a near perfect score on her SATs, and this, coupled with stellar grades and fencing ability, made her the most highly recruited high school senior the year she graduated. Columbia University should have been the obvious choice from a fencing and social perspective. However, Kamara selected Princeton, specifically because she felt that University offered better options in her primary areas of academic interest. Even at that age, she could see beyond her athletic career, and was preparing for the future.

Kamara was a survivor; of abuse, of neglect, of poverty and of homelessness. I will not recount the sordid details of all that she endured. All her life, she refused to be defined by her suffering, but rather by her successes. At the beginning of her senior year at Princeton, Kamara had herself admitted to a psychiatric hospital and received a diagnosis of schizophrenia. After only three months of treatment, she was released and returned to school. In a single semester, she managed to complete one year’s worth of credits in addition to a 120 page senior thesis and graduate on time. Subsequently, Harvard University admitted her to a Master’s program in comparative religion. Unfortunately, mental illness proved Kamara’s most unrelenting adversary. Still, just prior to her death, she had resumed a stable drug regimen, was living comfortably and had begun thinking about the future.

The world will never know what Kamara James was capable of accomplishing had she not been so cruelly afflicted. Yet we who knew her, and loved her, will forever celebrate what she did in a life too short, and mourn what might have been.

A memorial hosted by the Fencers Club is currently being planned. I will post specifics for those who might wish to attend as soon as possible. 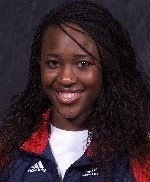 US Medals Around the World