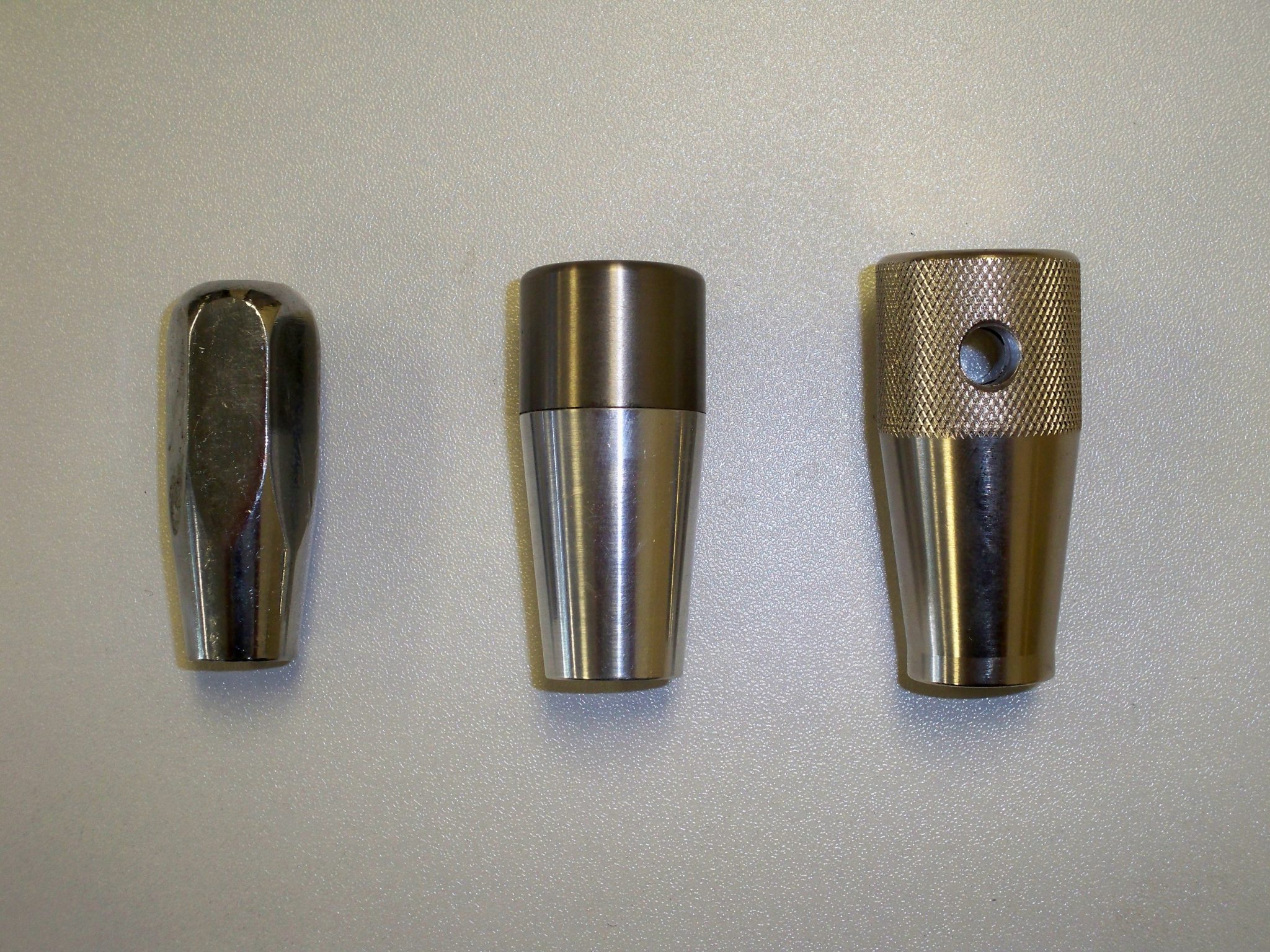 When fencing with a French grip, what is the best grip and pommel setup to use?

This is a question that often comes up at our equipment booth, in the shop, and in the forums.  Recently a new pommel has come to market – the TungstenFencing (STP) pommel.

Being the gear heads that we are here, we wanted to take a look at this and see if this pommel would really live up to the hype.  To test we compared the STP pommel to a standard french grip pommel (the low end) as well as the Leon Paul 200g epee pommel.

The maker of the pommel claims the following benefits for his new pommel:

We wanted to use the standard pommel as the base line since that is what ships with over 80% of the french grip weapons sold these days.  The comparison with the Leon Paul 200g pommel was to compare pommels of equal weights.

The STP takes this category.  The pommel looks nice.  It is compact and sleek and when put on an epee makes it look pretty.  The standard pommel is just that – standard: does the job but is more for cranking it on with a wrench than providing any performance enhancements.

The Leon Paul pommel looks imposing.  It’s bigger and a little fatter.  See the photo above and also to the side here to see the differences in diameter.

It depends on if you are holding your epee as a traditional french style or posting.  When either way, both pommels beat the standard one.  Here’s where we see the validity on the STP’s claim to be better for fencers with smaller hands.  The Leon Paul pommel did rub up against the forearm a bit more, which could be annoying.

Both the STP and LP pommels made the epees feel lighter.  This is a “trick” accomplished by moving the center of gravity (CoG) of the weapon back towards the guard – ideally right where the guard meets the blade, or even slightly inside the guard.

This is another “feel” type of category.  We felt that the Leon Paul pommel offered better utility for posting, or holding the epee at the pommel to gain more reach.  The STP pommel is smaller and smoother, which necessitates a good bit of tape to provide a rougher surface to grip and to enlarge the surface area for easy of holding while posting (or pommeling).  The Leon Paul pommel, by contrast, has a roughed-up end to the pommel which makes it easier to grip out of the box.

Final Test: Do they actually work?

Does either pommel actually shift the balance point of an epee back towards the guard enough to matter?  We would say “yes” without even trying to measure this due to the change in feel of our french grip epee when we switched from a standard pommel to a heavier pommel.  Just how much of a change in balance point is it?

Here are photos of each.  This is a standard electric epee using the FdN Advanced Gold epee blade and Aluminum Core french grip:

Each of the heavier pommels moved the balance point back to about the same point.  (Interestingly, our first test was with a Vniti and the LP and STP pommels both had balance points inside the guard when fully assembled.

Ease of Installation and Upkeep


Here’s where we start disliking the STP in favor of the LP or even Schermasport (which we did not test for this article.)  The STP comes with a set of installation instructions and cautions against over tightening the pommel or else you’ll strip the threads.  The pommel, in fact, is round and smooth with no hole or slot for any kind of tightening tool.  You’ll have to use your hands and that’s it.

The reason for these cautions is that the threading for the STP pommel is in the soft aluminum.  If you over tighten, you’ll strip out threads in the aluminum and hurt the pommel.  The solutions given by the manufacturer are to use a small nut (like what LP sells with their carbon fibre grips) for tightening or to use loctite.

The LP pommel has a hole for putting a screwdriver or bar through for leverage and also an M6 allen key hole on the top.  Both allow for the fencer to use common armory tools to tighten their pommels as much as they need to.

Looking at photos of the Schermasport pommel, they have the pommel in two pieces so that the threading can all be in the steel portion and they include the hole in the pommel for tightening.

For us, this put the STP at a severe disadvantage to the market.  We like to use our existing tools, and telling us that a pommel is fragile puts us on edge, especially if we’re thinking about the pommel working itself loose midway through a large regional tournament and needing someone to calmly hand-tighten it.

Just how much will it cost you to tinker with the balance point on your epees?

We’ve learned that Leon Paul has ordered a batch of the STP pommels for a market test and they should be available at the Leon Paul booth at the US Summer Nationals.

Fencing for the Blind in Italy