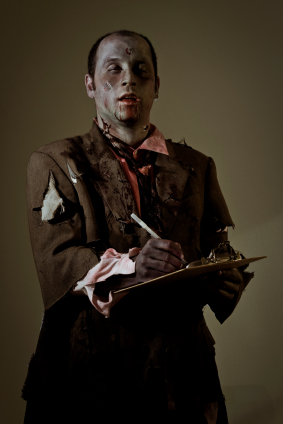 What do fencers need to survive the zombie apocalypse?

There are plenty of resource guides available for overall preparation for a zombie attack. Take stock of your own gear to determine what’s the best fit for surviving against the zombies.

The first thing that you need to do is be able to tell friend from foe. In other words:

Yes, at the end of the day they do shuffle around a bit and their eyes can get that glazed over “must eat brains now” look, but your typical fencing referee is not a zombie. The fact that they do take on some zombie attributes late in the fencing day makes identification of the zombie threat a bit more difficult, but we’ve found these  methods to be tried and true winners:

How to tell Referee from Zombie?

(1) Ask a question about “Point in line” loud enough for the potential zombie to hear. If they grimace in pain and are looking for a way to avoid you, you’ve found a referee. If they shuffle forward with that glazed look: zombie.

(2) Offer to buy them a beer. If they continue to shuffle towards you: zombie. If they accelerate: referee.

(3) Check for sarcasm. Zombies don’t have the capacity for it.

Now that you know how to tell friend from foe, let’s have a look at the gear you have to determine if you’ve got what you need to fend off a zombie attack.

We’ll start with the protective gear. Just in case you end up in the middle of a bunch of zombies, you’ll need to be able to survive without the full on zombie bite.

The bite strength of an adult male can top out at about 587N of force. The zombification process leads to stronger jaw muscles (at least before full on decay sets in) as the zombies need to crack through bone to get to brains and marrow.

Because of that, you’ll want something better than 350N. Go for an FIE jacket and FIE knickers. While 350N could be survivable if their teeth aren’t too sharp, you’ll want protection that lasts several encounters – just in case.

Fencing pants don’t cover the entire leg, so you’ll need to beef up your protection there. The FIE pants protect your meaty fencing thighs, but socks just won’t cut it against a full-on zombie grab – especially once they get their fingernails sharpened. These track pants are 350N and fit down to your ankles, so they should be good to go.

What would a fencing article be without discussing shoes?

There is a debate between really light weight shoes and something with a steel toe. The advantage of a steel toe boot is that if you are left without any other weapons, you can still deliver a bone crushing kick and then still be able to outrun most zombies. The steel toes can slow you down over time. The extra kicking force imparted by the mass of the steel toe is outweighed by the extra fatigue that the weight would cause.

Our recommendation is for something that covers the ankle (less exposed areas to get bitten), so we’ll go with the tried and true Doc Martens. Go with the standard black is it will match the track suit. There are other colors available if your entire college team wants to be able to spot friendlies from 50 yards away.

Under no circumstances should you use wrestling shoes. Nuff said.

This is a big debate. Obviously you go for FIE – you need the extra bib protection and who wants their mask to rust out during the zombie apocalypse?

The big question is Visor or standard mesh. Since general utilities and power are bound to suffer (even though we believe their customer service ranks are already infiltrated), so the visor provides you with the most visibility in a low light situation. The loss of a bit of peripheral vision due to the steel frame for the Lexan is worrisome, but you’ll be traveling in groups anyway so you can watch each others blind spots.

Now that you’ve got your basic protection covered, let’s talk weaponry. Fencing stuff just won’t do it here. We’re a safety conscious bunch and that just won’t due for matching up with zombies. They don’t care if you break a blade on them and that just gets your BF stuck in them with no chance to retrieve it or get a refund.

If you’re going to arm up to fight with the zombies, you need some medium and short range weapons.

For this, I’ve got to go with Bruce Campbell and get a boom stick:

This is what FVZA.org has to say on the tried and true shotgun:

Shotguns can be very handy weapons at keeping back small groups of undead whilst letting rip with a more accurate weapon such as a magnum or semi-automatic weapon. Sawn off shotguns give you a wider shot though many shotguns have an a heavy kick back, in some cases depending on the type or make of the shotgun there is a risk of breaking a bone if not used properly. Holding this weapon makes you feel powerful which will help you mentally when facing the living dead.”

The big drawback to shotguns is the need for ammo. You’ll run out eventually, so a melee weapon is in order.

After looking around, the best looking ones are over at Zombie Tools.

This custom made anti-zombie device is made to cleave through the undead with enough speed to let you turn and bolt off.

The folks at Zombie Tools make the Urban Bone Machete Mark III from a full-tang blade of 5160 spring steel with a hand-sculpted T6 aluminum handle. Comes with black Kydex sheath. They are currently accepting pre-orders and run about $330. For something a little more affordable, go with the Para Bellum at about $190.

You could go with some cheap Bud-K wanna-be katana, but we’re going for maximum decapitation and limb cleaving power here.

As with any survival situation, preparation is key. We’ve just touched on a few of the things that you’ll need for basic personal protection. Stock up on the cases of spam and Ramen noodles just in case, and don’t bother with building a bomb shelter – we’ve all seen what happens then.

Got any more zombie survival tips? Share them in the forums.