SOPA – Why you should call your Senator to Oppose It 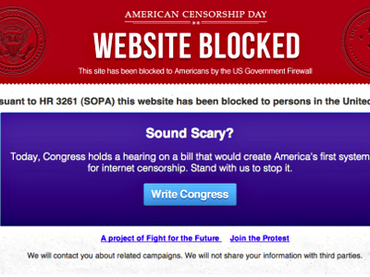 SOPA (Stop Online Piracy Act) is a really bad bill that looks to be on the fast track for voting when Congress comes back in session.  I usually don’t say anything about politics on this site or on the forums – I’m supposed to be reporting on fencing and working on linking out to other fencing and fencing-related resources.  There are lots of other sites that talk about all the other stuff.

BUT, I do allow people to discuss their views on the forums, to link to content (news articles, videos, photos) that they find funny, interesting, or entertaining.

With SOPA, all of that could get shut down.  The “entertainment industry” is so hard core against the pirate web sites and so pissed off that they can’t shut down the off-shore web sites, that they are now trying to find ways to force US based ISPs (Internet Service Providers) to block, ban, or blacklist any site that is deemed to infringe.

If you look back on how the industry (look at the RIAA as an example) has used their legal ability to go after the pirates, you’ll find a host of abuses of power.  Even now, if you are accused of infringing on copyright then the various web properties (YouTube, etc) act on a presumption of guilt – you’re guilty until you can prove to their lawyers that your content does not infringe.

That’s not a group of corporations that I’d want to entrust with additional censorship control over the Internet.

As a practical matter, SOPA would allow for sites to be taken down, blocked, and their merchant accounts potentially closed for even one infringing link – that any user posts!  (Plus, that user could get 3 to 5 years in jail.)  That kind of hanging threat would cause many online forums and content sharing sites (like Digg or Reddit) to either have to spend a lot more money on potential legal defense, or just shut down.

Check out this video explaining SOPA and PROTECT-IP.  Then let your Senators know what you think.

Here are some links to check out:

via CNN: How SOPA would affect you

The Colbert Nation talked about it’s support for SOPA: Colbert on SOPA

Live Results from the Portland NAC