Internationally Renowned Scientist Keeps Young with a Sword in His Hand

Dr. Wallace Friedberg is known worldwide for his pioneering work involving solar radiation. He has overcome personal bouts with cancer and tuberculosis, yet still spends several evenings each week with an epee in his hand, training at the local fencing club. Wallace is 82 years old, and sums up his multifaceted life story in one declarative sentence: “I’ve had a lot of fun.”

{sidebar id=1} Wallace was already 40 years old, in 1967, when first introduced to the sport of fencing. He joined a class on a whim, and found himself learning from the famed coach Oscar Parsons. The sport—still young in America then, particularly in Oklahoma City—engrossed him.

“I am not sure what drew me to the sport, but I got hooked quickly.” He began to spend weekends traveling to Tulsa and Texas, taking extra lessons and competing in tournaments. “I loved it so much and used to win trophies all over the place,” he laughs. Forty years later, he continues to fence recreationally, spending many evenings getting exercise against people half and a quarter of his age. “I love the people you meet fencing—it’s a great discipline that helps you in everything… and it’s fun winning. I love to win!”

Beyond fencing, Wallace has lived a full and esteemed life. Through connections that his father had with Dr. Norman Vincent Peale, author of The Power of Positive Thinking, Wallace was able to go to Hope College, in Holland, Michigan. “Dr. Peale said he would recommend me to Hope College as a prospective student even though I am Jewish and they were Dutch Reformed. When it came down to the wire, and I hadn’t heard back from the school, Dr. Peale called the school president—woke him up in the middle of the night—and got me in.”

In 1960, he was hired by NASA and the FAA; during the dawn of space exploration, and with the recent explosion of commercial air travel, people were terrified of the possible effects of added solar radiation on astronauts, pilots and others in the air. Wallace led a team of scientists at the University of Oklahoma, performing revolutionary research on the health risks of radiation exposure in the earth’s upper atmosphere. He has served various functions for the two organizations since, traveling the globe performing in various capacities.

Wallace rattles off a list of countries—Ireland, Norway, France, Germany, Sri Lanka— where he has given obscurely titled lectures such as, “Transport Index Limits for Shipments of Radioactive Material in Passenger-Carrying Aircraft” and “Cosmic Radiation and Magnetic Field Exposure to Airline Flight Crews.” His discoveries have been reassuring, groundbreaking and occasionally frightening, and have led to a number of changes in the FAA’s flight protocols.

Through all the successes, his life has not been without hard times. In the mid-‘50s, Wallace spent nearly a year in a VA hospital with tuberculosis. He survived thanks to experimental drugs. A decade later, he spent another year undergoing treatment for non-Hodgkins lymphoma cancer. Again, he won the fight.

His most difficult challenge, however, occurred just over two years ago. His wife Betsy died of pancreatic cancer. They had been together 49 years. “We had one of the best surgeons in the country, but she was just diagnosed too late.” Wallace’s voice still cracks when he says her name. He struggles sleeping to this day.

Despite his recent loss, Wallace remains upbeat, with fencing his longtime sport of choice. He believes in the classic American motto, “Don’t give up! Keep at it!” And whether he applies these words-to-live-by to his professional career, battles with the sword or recovery from repeated personal tragedy, he is able to push through and find fulfillment. He may be 82 years old, but asserts, “I am nowhere near finished.”

1927: Born in the Bronx, NY
1945: Serves in the Navy during the Second World War
1951-53: After graduating from Hope College in Michigan, earns Masters and PhD
degrees in Physiology from Michigan State University
1958: After a yearlong bout with tuberculosis, recovers and marries his wife Betsy
1960: Begins working on the effects of radiation on pilots and air travelers for the FAA
1967: Sees an ad and joins a fencing club instructed by Oscar Parsons, developing an ongoing passion throughout his NASA, FAA and academic careers that continues to this day
2007: Wallace’s wife passes away of pancreatic cancer after 49 years of marriage

Josh Rigsby is a feature columnist for journelism.org and an epeeist on the Southern California Division. When not writing or fencing (or writing about fencing) he enjoys working at his church in downtown Los Angeles.
Tags:vet fencing, Wallace Friedberg
Share:
Facebook0Tweet0LinkedIn0Pin0
Previous Post

Love of the Blade - Saber Coach Journeys through Olympic Disenchantment 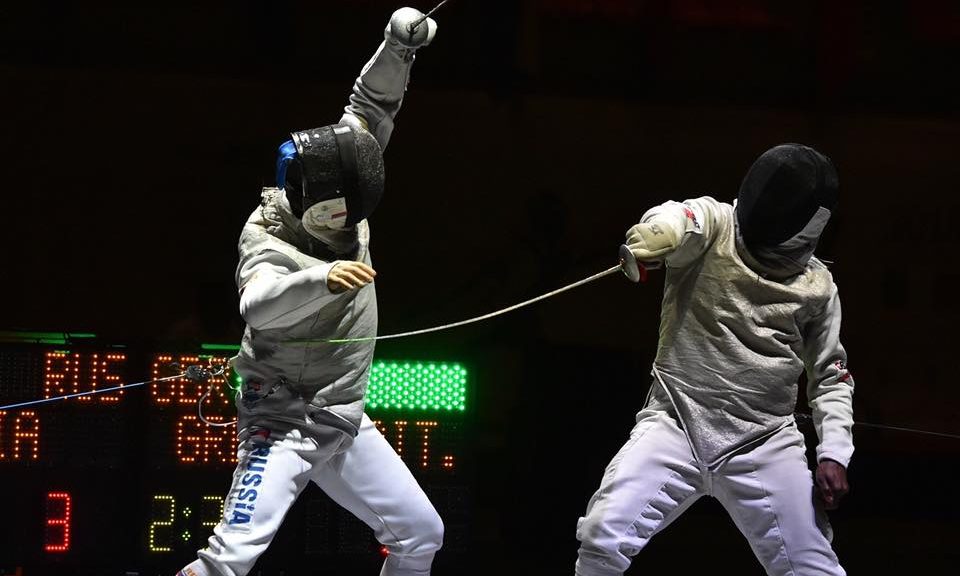