How to use Video to Improve your Fencing 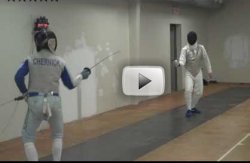 I watched a video of me fencing and was horrified at the sight.

At most fencing tournaments there are a plethora of fencers, coaches, and parents sporting video cameras of some capacity.

How many of you have these archives of your fencing? What are you doing with this goldmine of information to improve your game?

That thumbnail you see at the beginning of the article is on Fencing.Net’s YouTube channel. It was my first foil tournament in 8 years. The USFA has degraded me from an A to a C and, for some reason, I felt the need to compete in a foil tournament. With one fencing practice (to see just how many flicks I could miss) under my belt I went into the fray.

The tournament went quite well for me. I took 2nd place in a 15-14 match. I felt like I was a bit sloppy on some touches and didn’t have a very complex game. Still, I thought that my basic technique was okay.

Then I saw the video.

After commenting on the video and bemoaning how off everything looked (and how it shattered my self-image of having halfway decent form), I go to thinking.

How many of those videos are getting put to use?

Here’s my breakdown on the things that you should be doing right now with video to improve your game. Mix and match the techniques depending on if your video is of you or of club mates.

6 Tips on Using Video to Improve Your Fencing

1. Celebrate the things that work.

There is so much you’ll see in a video that points to the improvements you need to make. Before beating yourself down, watch the video and note what worked. Praise yourself on that success. You’re good at something

Go through the video again with a notebook in hand and take notes on the most consistent mistakes or areas for improvement. These could be in technique, footwork, or tactical reaction/choice. Pick no more than 3 of these and use those as a basis for improving your fencing.

Which 3 you pick depends on how much work you’re willing to put in. If you want to be able to check off an item quickly and build on the good feelings of initial success, then pick something pretty easy to work on first. The goal here is to keep improving, not throw up more roadblocks.

Combine tip 2 and tip 1. Take the earlier videos of what you were working on and some videos of your improved techniques/tactics and make a clip show of the improvements. You can use movie making software like iMovie or Windows Movie Maker to do this.

Having these videos is a good way to look back over a partial or full fencing season and see just how far you’ve come.

4. Realize that what you think happened and what the referee actually saw may be different.

Back to the video that inspired this article. In my head, my actions were a little big, but not grossly so. In my minds eye I attacked using feint with a slight pull back and then extension with lunge to hit. What actually happened was an initial feint, then an advance with my elbow coming back behind my hip before finally reestablishing the attack with my lunge. Luckily for me, my opponent was going backwards and unable to capitalize on my mistake.

For this reason, you should not argue what the referee saw unless you have already trained yourself enough to have a very accurate self assessment of what you are really doing on strip.

If you have questions about the call, look to your coach or a team mate. They’ll have a more accurate assessment of what happened in the heat of the bout.

This goes back to tip 1 above. Celebrate your best fencing actions with a highlight reel. Don’t just let it sit on your computer at home, however. Load it up on your ipod or iphone and bring that video with you to tournaments.

You can get really fancy with the editing and add transitions and music, or just add some text to identify the actions.

Use the video as part of a visualization technique to get you focused before your tournament on the actions that work best for you.

6. Use clips of your fencing heroes.

In 1992 Gatorade aired their "Be Like Mike" commercials. Who hasn’t idolized a hero and role played being just like one of our heroes?

Take that idea and make your own inspirational video. Grab some clips from youtube of your fencing heroes on the international scene, be it Baldini, Joppich, or Meinhardt – or you could take clips of fencers you admire on the regional or local scene. Put together a clip show of the actions that you are working to incorporate into your own game.

If you want to take that one step further, then plug in clips of you doing those same actions. Add some music tracks from a service like animoto and you’ve got something for Friday movie night at the club.

Use just one, or all 6 of these tips for video and you’ll increase your confidence in what you do well and learn a lot more about your own fencing style and game. This article focused on things to do for general improvement, but you can get really hard core and break down videos of all of your recent opponents and create your own catalog analyzing their strengths, weaknesses, and favorite actions. (Almost every pitcher in major league baseball has a "video book" on the hitters they will face.)

Most of us are at the point where just working to improve ourselves will pay off the most. There’s a lot more to do with video, however, and I’d love to hear more about what you do.

Dust off those old video files, or make a pact with a club mate to video each other’s bouts and start.

Do you have your own tips on using video? Any successes to share? Hit me up on the forums or by email at craig AT fencing.net.