Fanning the Flames of Sportsmanship 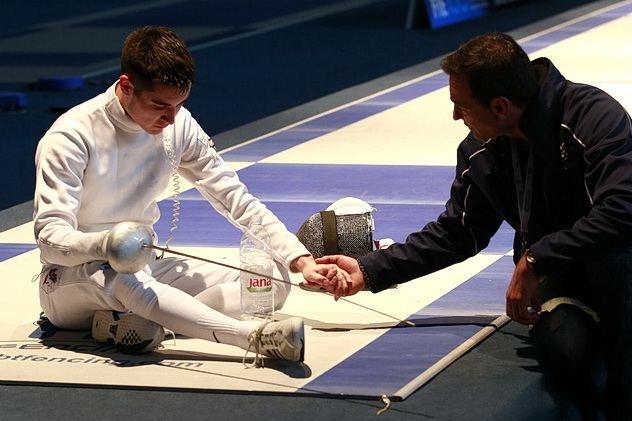 In 2010, at a national-level tournament, I had a student fencing in Cadet Men’s Epee to make top eight. At 14-14, he came forward with a huge advance and grandiose preparation and was hit for a single light to lose 15-14.

Dejected and angered from his close loss, he spiked his mask, hard. The referee stared him down, waved him over and proceeded to explain why he should give a black card, but wouldn’t  My student looked like a dog with his tail between the legs, but I didn’t think this “almost punishment” was sufficient. At the time, I could have let the incident go, but I was truly ashamed in that moment to be his coach. I thanked the referee and asked him if he would be in the venue the next day. He said he would.

I approached my student.

“I want a five page handwritten note to be turned into your referee apologizing for spiking your mask. Explain to him why this is not a reflection of your behavior or your club. I want it in his hand before the first events start tomorrow.”

“No buts. And I don’t want to see you in the club for a week. I don’t tolerate that kind of behavior.”
I turned and walked away, perhaps adding insult to his injury. I never saw “Darin” have another outburst, and he became increasingly friendly to referees. It was a lesson that had to be learned. In a game of chivalry like fencing, sportsmanship is equally important to ability.

“Darin’s” case was an opportunity to nip the behavior in the bud, and we succeeded. But what happens when we as coaches, parents, and athletes stop stressing the importance of sportsmanship? What happens when the win becomes the only thing of importance? These issues came to light in a recent discussion had among some of my fencing friends in response to the tragic, untimely death of Soccer referee Ricardo Portillo.

It is unfathomable to think that a fencer would ever resort to assaulting a referee as Ricardo Portillo was; yet, throughout our discussion, my referee friends ruefully recounted a series of anecdotes that indicated that such behavior in fact COULD be possible. One told a story of a NJ high school event where a losing fencer screamed in anger and broke a blade over his own head. I told a story of a man who was black carded for telling a ref to “[expletive] himself” and refused to leave the strip for 20 minutes. Another told the tale of a losing fencer who threateningly made gun gestures at her following a loss. And most unfortunately, all agreed that the recent Super Youth Circuit (SYC) in New York was chock full of fencers AND parents who disrespected the officials and exuded prima donna behavior.

Virtuous behavior must remain commonplace in fencing, or we stand to lose our values that have made our sport great. Charles Astudillo, a longtime and well-respected referee summed it up best: “We are human after all, but there needs to be a change in thought. It’s a difficult leap to make. Not just in our sport either, we need to teach sportsmanship again. I watched too many bouts at this most recent SYC where the losing fencer lost it right along with the bout. We need to teach sportsmanship at the clubs, and we need most of all to enforce it locally and nationally.”

Parents, coaches, and athletes, I implore you: winning isn’t everything. Teach your child/student to conduct himself/herself as a sportsman, and it will go a long way both on and off the strip. The decades long friendships we form in fencing are forged through the bonds of mutual respect in competition, familiarity with the same faces and opponents over the years, and through the joy of fencing itself. Take that away, and we’re a bunch of barbarians wielding swords.