An Ode to Veteran Fencers 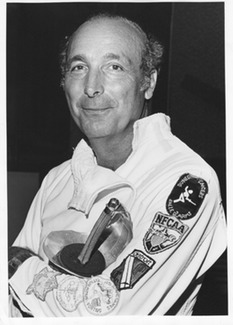 “I don’t care about age very much. I think back to the old people I knew when I was growing up, and they always seemed larger than life.”

As a rite of passage to fencing success, a fencer is likely to be subjected to multiple beatings at the hands of a veteran fencer. Growing up in Florida, I had the privilege to train with fencing master Jim Campoli, a man who had once captured A’s in all three weapons and was still competing in the open division well into his 80’s. Mr. Campoli had three passions in life: golf, fencing, and the local Moose Lodge, of which he was a member. So when Mr. Campoli approached me and asked me if I wanted to do a fencing demonstration at the Moose Lodge in front of his brethren, how could I resist?

I arrived with my friend Morgan, one of Mr. Campoli’s saber pupils. We sat down to our meals and enjoyed a pleasant dinner.

“Suit up, Morgan. Let’s do this.” Campoli said.

The crowd carved out a tiny space in the dimly lit lodge between the bar and the tables where we would do our fencing—hardly any room to operate.

“Ready, fence!” and Campoli charged at Morgan with the speed and swiftness of Daryl Homer.

Mr. Campoli hit Morgan with pure force; loud enough to echo through the lodge. I quickly realized that this wasn’t a “casual fencing demonstration,” but a fight for survival.

Morgan retreated into a bar stool and stumbled backwards, losing his footing. Mr. Campoli did not relent.

And the thwackings continued, one after the other. The bout ended overwhelmingly in Mr. Campoli’s favor, and it was my turn. Mr. Campoli took out his epee and gave me a confident wink before putting his mask on. I interpreted the wink to mean “you’re going to take a beating worse than the Denver Broncos.”

I tried to outmaneuver Mr. Campoli; but, despite being in his 80’s, he moved with incredible swiftness and matched my speed with every step. Each hit felt like I was being hit by an 18-wheeler. No matter the parry, Mr. Campoli plowed through with pure strength. He defeated me with the ease of James Bond taking down a token henchman. Like a smooth operator, Mr. Campoli took off his mask and sipped a beer he had sitting at the bar. The small crowd was rowdy as their friend took down two young whippersnappers effortlessly.

That was fencing in Florida in a nutshell, a state with a large and capable veteran presence. Besides regularly falling to their blade, it was like being around dozens of extra mentors. Whether it was Dr. Michela LaRocca, a German immigrant who came to Florida and embodied the American dream by starting a successful restaurant business, Ken Drewke, an almost Olympian in Archery (thanks Jimmy Carter!) who taught me the importance of hard work and training more diligently than the guy you wanted to beat, Richard Byers who always reminded me that fencing is simply “fun,” or Princess Rashid who taught me how to balance competitive intensity with Zen, each veteran I grew up around provided wisdom and life lessons that I carry with me today.

Veteran fencers bring an abundance of cunning and experience to the strip that often overrides the speed and athleticism of their younger counterparts. There’s a certain level of fondness I have as I look back on my teenage summers spent at DC Fencers Club, where I learned much from the clean flicks of Kaz Campe, the impenetrable defense of Jim Adams, and the tricky fleches of Valerie Asher.

And who could forget the 2003 Summer National Championship? It was a site to behold as a 52 year old John Moreau came back from a 14-8 deficit to beat Chris O’Loughlin in the semi-final, and then score a decisive 15-6 victory over three-time Olympian Soren Thompson. What Moreau lacked in brawn, he made up with brains and thought three moves ahead of his opponents.

The astute fencing prowess of veteran fencers must be respected, but it doesn’t paint the complete picture of who the veteran fencer is. Veteran fencers are our mentors. They are leaders in their professions, leaders in our fencing clubs. They are mothers, they are fathers, and they offer wisdom to younger members of the fencing community that complement the sagaciousness of our parents and coaches. “Unlike our teenage clubmates, who have parents to manage their schedules, pack their lunches, and drive them to tournaments, veteran fencers manage jobs and families. We make hard choices about where to focus our time and effort. We manage the injuries that are more frequent as we age” said Lisa Wolf, a veteran fencer out of Riverside Fencing Club.

Above all else, the Veteran fencer is like family. I remember dealing with the loss of Jay Avelino, a longtime Central FL division competitor, referee, and coach. When his passing was announced at a local tournament, a wave of anguish fell upon the competition that stopped all fencing for close to an hour before we could find the strength to continue. To the families, athletes, and coaches, Jay taught our community what fencing was about, and regularly preached the values of sportsmanship, chivalry, and respect—while swiftly dominating the Florida saber field for a long time. When Jay was done with practice, he’d always chat it up with the kids in the club (who all looked up to him), and provide constructive criticism to better their fencing. His larger than life personality, affability, and the fact he would go out of his way to make every kid feel special made him the quintessential veteran fencer. Jay was not just a fencer or another referee in the community. He was family, and a staple of our community.

In Fencing, we are fortunate enough to be competing in a sport for all ages. Tim Morehouse once told me: “One of the great things about fencing is that you can do it your whole life. Other sports you have a time limit. A female gymnast is done by 19. Football, if you don’t make the NFL, you’re done when you graduate college. In fencing, you can always find a division and level where you can fence.” For this reason, fencing is the truest community sport there is. In few other sports is your competitive journey taken alongside people twice or thrice your age who are just as likely (if not more so) to be slapping you around at age 45 as they are at age 25. Most importantly, we are fortunate to have them as leaders in our clubs, as mentors off the strip, and as supplemental family members in our lives. Thanks to the Jim Campoli’s of the world, or the Jay Avelino’s, my life has been made better because veteran fencers have been a part of it. I think yours has too.

What do Veteran Fencers Mean to You?

“They mean fun stories about hijinks that happened 30 years ago and many tips of the trade.”

” Veterans are some of the best mentors for younger fencers. I would not be nearly as good as I am today if I hadn’t had so many kind and helpful veteran supporters take the time to talk with me and help train me over the years. They come to the club; they share their experiences and advice; and they share their love of the sport. Thank you for sticking with it, old people! The sport is a bit better for everyone because of you!” -Jonathan Yergler

“They mean that I have lots of funny stories to look forward to, friends to commiserate about old age injuries to and that I have a future in fencing to some extent. Seeing good older fencers made the sport appealing to me at 18.” –Cyndi Lucente, Head Coach of Richmond Fencing Club

“As a newcomer to the VET events, I am excited about still being able to fence, participate in USFA sanctioned events and perhaps one day, still have the opportunity to represent the US in some international events. For me, this is what makes fencing so unique among other sport, its athletic longevity in a competitive environment unlike any other sport. Not to mention lifelong friendships that have evolved from youth, through college, the old sectionals, current NACs and so on. All the remember whens, and watching the evolution of fencing in the US and abroad.” –Nestor Grajales, Head Coach of Stocatta Fencing

“Vet fencing: you win some, you lose some, you drink some.” –Mike Perka

“Absolutely some of the most welcoming and friendliest people on the strip, as well as good mentors to have.” –Salim Short

“Veteran fencers have the same common mentality with other adult fencers, coaches, fencers in their teens and youth fencers. No matter how old you get or how old you are. If you love the sport, you’ll keep playing it.” –Anthony Richard

“A fencing bag with a dozen weapons and a vat of balm.” –Paolo Damiani

“Joy of the sport personified. Plus, as twenty-something fencer, I love fencing Vets because they are typically so damn wily, at least compared to a lot of younger fencers – makes me better.” – Grant Campbell

“I fear them. ‘Age and treachery always overcomes youth and skill.’” –Cory Price

“[Veteran Fencers] are there to have fun. They set a good example for when I get depressed about losing.” –Scott Dubinsky

“They can give brilliant advice, stories that leave you roaring in laughter, and can describe how the sport has changed. They’re signs of what was, what is, and are helping to shape what will be. They, above all, deserve the highest of respect.” –ThanatosOprheus (reddit)

“Veterans are the nicest and toughest to fence. Somehow they appreciate the game so much more than is newbs. And they radiate that passion. Warm fuzzy feelings.” Jabra (reddit)

“It’s pretty much instant street cred for a coach that is also a vet fencer. He’s got the same rules and constraints that you have to deal with, the same training hurdles. You know that he knows what he’s talking about and that trust helps you push thru the ‘it isn’t working for ME’ phase when you are trying to expand or change your fencing game.” –White_light-king (reddit)

Damien is a competitive fencer and  assistant coach at DC Fencers Club in Silver Spring, Md and Arlington Fencers Club. Damien was the coach of a London 2012 Olympic Athlete in Modern Pentathlon. He is an A-rated epeeist and was a member of the 2012 North American Cup Gold Medal Men’s Epee Team, and a Silver Medalist in the 2013 World Maccabiah Games.