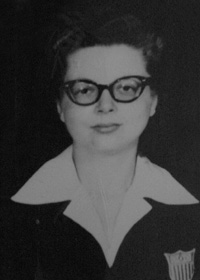 In 1948, Maria earned a berth on the U.S. Olympic fencing team for the 14th Olympic Games at London. In London, Maria advanced through three preliminary rounds to reach the final of eight in the individual foil. There, she missed winning the Olympic championship by two touches. In what proved to be the final’s decisive bout, Maria met Ilona Elek, the defending Olympic foil champion from 1936 and the eventual winner in 1948.

Both fencers held records of five victories and one defeat. After taking an initial 2-0 lead in the four touch bout, Maria lost, 4-2, and finished in a three-way tie for second place; ultimately taking fourth place after a count of touches received and touches scored. To date, this remains the highest Olympic accomplishment in foil by a U.S. woman. The 1948 Olympics was Maria’s first and only international individual competition. (See a photo from the 1948 Olympics at the Museum of American Fencing)

In the more than sixty years following, Maria contributed her time frequently and generously to bout committee and administrative work for the Fencers Club, the National Intercollegiate Women’s Fencing Association and the Amateur Fencers League of America (now known as the U.S. Fencing Association).

Maria del Pilar Cerra was born May 17, 1918 and began fencing in 1928 at age 9 at the Salle Vince, originally in Brooklyn and later, New York. There, her coaches were Joseph Vince, Celestino Fernandez, and her father, Julio A. Cerra (who was an amateur competitor). It was not uncommon for Maria to receive a lesson from each of them in a single evening of practice.

Maria has been a resident of Glen Rock, NJ, since 1953 and was an elementary school teacher in the Oakland (NJ) School District for 20 years, until retiring in 1984.Prior to marriage she had a business career that included serving as insurance manager for the American Union Transport Shipping Company in New York.

Her late husband, Peter Tishman, was the former treasurer of the Amateur Fencers League of America and all three of their sons fenced for New York University.

Maria is survived by two of her sons, Jeffrey Tishman, of Glen Rock, NJ, and Thomas Tishman, of Mendham, NJ; and three grandchildren: Jonathan Tishman, Maggie Tishman, and Rebecca Tishman. Another son, Daniel, died in 1979.

(Posted via the Forums)