Fencing in the Media Friday Roundup: Chopped, Live with Kelly, and more 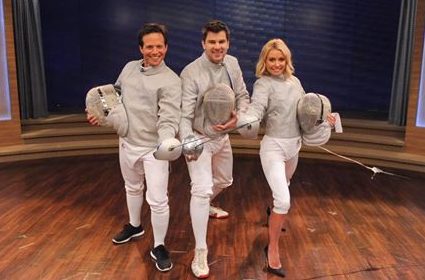 This was a big week for fencing in the media! Fencing found itself in a relatively large spotlight on two major, high viewership television shows and an event replay on ESPN3.

First up, Tim Moorehouse fences with Kelly Rippa and Scott Wolf on LIVE with Kelly!

Although the video above heavily features fencing, the entire episode had fencing tidbits peppered throughout.

In the second video, Mariel Zagunis is featured on Food Network’s Chopped cooking up some quick meals featuring random ingredients in front of a panel of professional chef judges. The episode can be found on YouTube here, but its a paid episode ($1.99). When a free version lands, we’ll update this post.

And then finally, ESPN replayed the 2017 NCAA Championships over the weekend. You can see the full production segment on the ESPN website here.