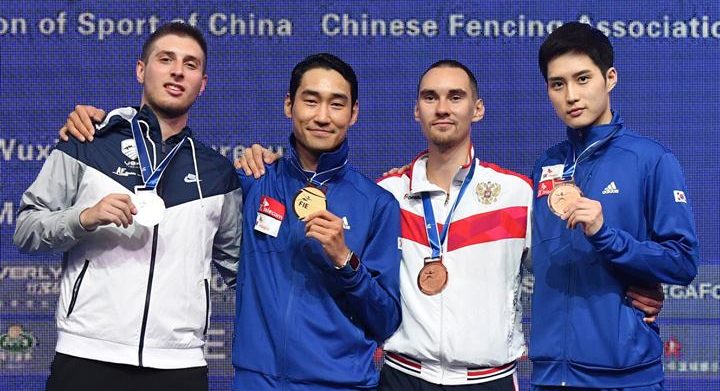 Korea’s Junghwan Kim and Italy’s Mara Navarria have taken gold in the men’s saber and women’s epee events on day four of the ongoing World Championships in Wuxi, China.

Racing through the qualifying pools on day one, top ranked Navarria fenced the competition of her life to reach the final against Romania’s Ana Marie Popescu on Sunday. Conceding ten touches or more only once, to France’s Auriane Mallo, whom she defeated 15-11 in the table of 32, she then dispatched of Team USA’s Katherine Holmes in the Table of 16 (15-9), Katrina Lehis from Estonia by the same score line in the quarter final, and then accounted for Switzerland’s Laura Staehli 15-8 in the semi.

Having easily eclipsed her previous best world championship result of 7th in 2013, in the final she faced Ana Marie Popescu from Romania, a former Olympic silver medalist (Beijing 2008) and fellow veteran of the world tour, with nine World Cup and six Grand Prix victories to her name. To get there, Popescu, who was ranked ninth going into the championships, overcame Ukraine’s Olena Kryvytska, whom she has subsequently replaced as world number two, 15-11 in the table of 8. She then out-touched Team USA’s Courtney Hurley in a tense semi-final, 14-13, before going down 13-9 to Navarria in a highly technical gold medal match. Hungary’s current Olympic champion, Emese Szasz-Kovacs bowed out in the quarterfinals to Staehli (14-13), while for beaten semifinalist Hurley, she became the first female American epeeist to medal at a world championships.

Speaking on US Fencing’s Instagram account, she said she was very happy to have fenced well after what she called a ‘rough season.’

“After I won the quarter final I was just smiling for an hour,” Hurley said, “I was giddy, like a little schoolgirl, (but) I think being okay with whatever happened today, really helped me be calm.”

Watch history be made! @thathurleygurrl will become the first U.S. women’s épée fencer to win a Senior World medal tonight after this win over Coraline Vitalis (FRA)!

In the men’s saber event, Korea’s Jungwhan Kim defeated USA’s Eli Dershwitz 15-11 in the final to add a first World Championship gold to the Olympic bronze he won at Rio 2016. To get there Kim needed to beat his top ranked teammate Bongil Gu, 15-10 in the quarterfinal, a result which handed the number one ranking to beaten finalist Dershwitz. Along the way, Kim also defeated Italy’s Luca Curatoli 15-10 in the table of 16 and now twice World Championship bronze medal winner Kamil Ibragimov from Russia, 15-13. For the left-handed Dershwitz, defeat in the final was slightly bittersweet, as his progress at these championships, which included a 15-11 quarterfinal victory over Hungary’s double Olympic champion Aron Szilagyi, meant he moved to number one in the men’s world rankings. Also speaking to US Fencing, Dershwitz expressed his joy at being among the world’s elite.

“Standing on that podium with such great fencers feels amazing, and to know that as a senior world medalist, the biggest tournament outside the Olympics, to know that your name goes down in the history books, it feels amazing.” Taking to his own Instagram account to celebrate, he also thanked his family, friends, coach and ‘everyone else who helped me reach this point.’

Silver and bronze at the Senior World Championships by @eli.dershwitz and @thathurleygurrl … An amazing way to open competition for Team USA! 📷 #bizziteam