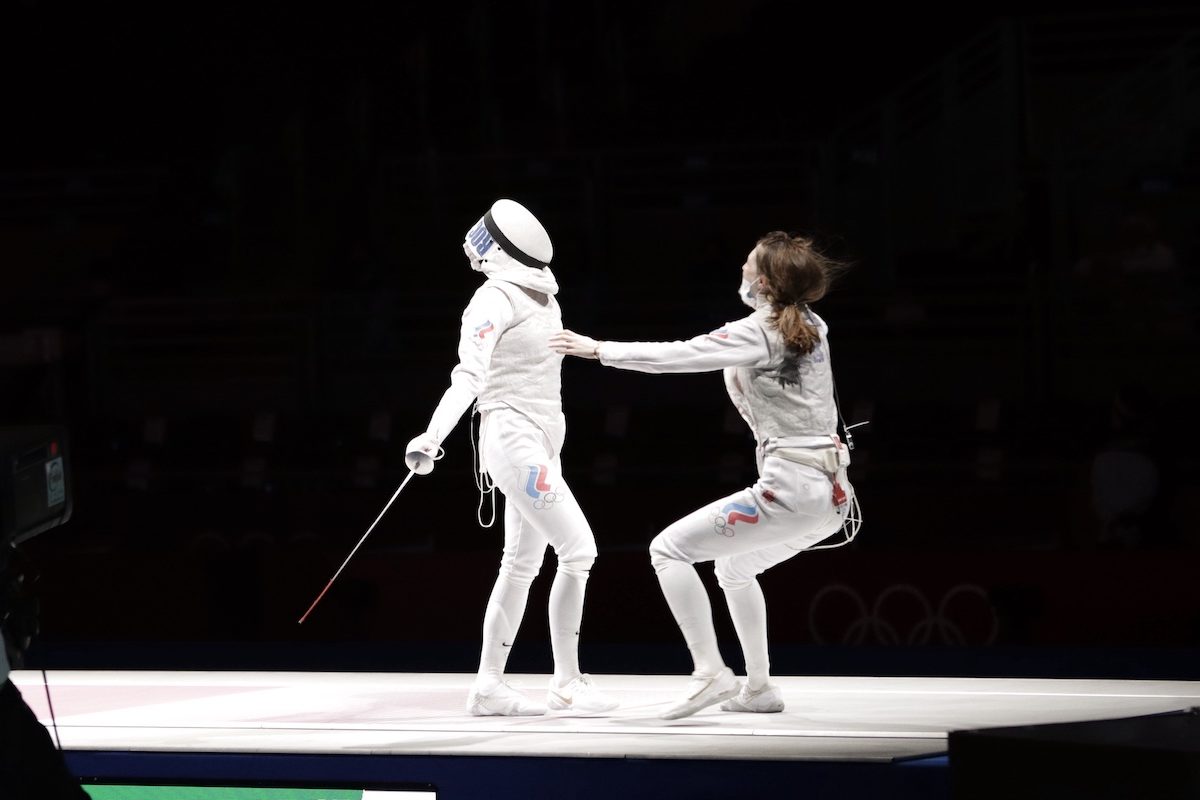 Russian Olympic Committee’s representative team soundly defeated France 45-34 to take Gold in the Women’s Foil Team event. Russia took a very strong early lead and never relented – their modus operandi for every other match of the day. All of Russia’s fencers were very strong today, including their alternate that was subbed in earlier in the day. In the final match, only one bout wasn’t closed out on the 5’s by Russia – due to time.

The Russian Olympic Committee team – Larissa Korobeynikova, Inna Deriglazova, Adelina Zagidullina, and alternate Marta Martyanova (who was subbed in in an earlier bout) – were the odds-on favorite to win due to a very strong team showing this season. They sit at #1 in the world by a fairly large margin, and are of course anchored by the very strong Deriglazova, who won Silver in the individual event just a few days ago. Russia has a history of producing results in the team events at the Olympics, with a Silver in London 2012 and Gold in Beijing 2008, but this is Deriglazova’s first Olympic Team Gold. The Women’s Foil Team event was not held in 2016 due to medal rotation.

The French team – Ysaora Thibus, Anita Blaze, Pauline Ranvier, and alternate Astrid Guyart – pulled off an unexpected upset against Italy to enter the final match. While France tends to produce strong women’s foilists, the country hasn’t managed to earn a women’s foil team medal at the Olympics since Los Angeles 1984. France comes into this event ranked #3 as a team, making them particularly standout, given the individual world ranks of their members.

In the Bronze medal match, Team USA, comprised of Lee Kiefer, Nicole Ross, Jacqueline Dubrovich, and alternate Sabrina Massialas, fell behind early and could never quite get their footing against the deeply experienced and reigning Olympic Champion Italian team. Italy, comprised of Arianna Errigo, Martina Batini, Alice Volpi, and alternate Erica Cipressa, consistently closed out matches with positive indicators which slowly built an insurmountable lead to take home the Bronze medal by a score of 23-45.

For Team USA, the night started with a strong victory 45-36 over the home team of Japan, but their next bout immediately put them up against the powerhouse of the Russian Olympic Committee. The US took a small early lead which was eventually closed up by the 7th match, where the score was 33-33, but the 8th put the ROC ahead and the anchor Kiefer couldn’t overcome the 3 point deficit required to close it out, falling in a rematch against Deriglazova 45-42 (both fencers having scored 6). Team USA finished the event where they seeded coming in – #4.

France defeated Italy to enter the final match – a somewhat surprising upset – in a nail-biting match that saw France very solidly behind early on, but through a series of very positive touch bouts managed to set up Thibus for an 8 point bout anchor bout to clinch the win and earn their chance for Gold.