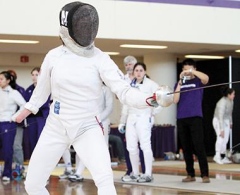 Karalina Collins, 19-year-old Northwestern University fencer was born without a right hand.  That hasn’t stopped her from pursuing her sport, one of several that is possible to play with one hand.

She works out as hard as her teammates, and finds her challenges lie mostly in activities like weight training, where two hands are important.  Collins’ teammates note her self-confidence in skill, never letting her disability get in her way.

The NYU men’s and women’s fencing squads faced stiff competition at this weekend’s Eric Solle Invitational at MIT.  The NYU men had a 2-5 record on the day, bringing their season record to 6-14.  The men beat MIT and Brandeis, but couldn’t overcome Penn State, Penn, Duke, Brown, or Boston College.

Coach Steve Mormando remarked on the improvement as a team and personal development among his fencers.

The 4th ranked Princeton women and the 6th ranked Princeton men competed this weekend at the Northwestern Duals.  They racked up 19 wins and only 4 losses at the competition.  Taking on No. 1 ranked Notre Dame was the highlight, though Princeton did not come out ahead.

The Princeton team was hindered by the absence of some key fencers, some injured and others competing individually at the national level.

Next up the team prepares for the Ivy League Championships this weekend at home.