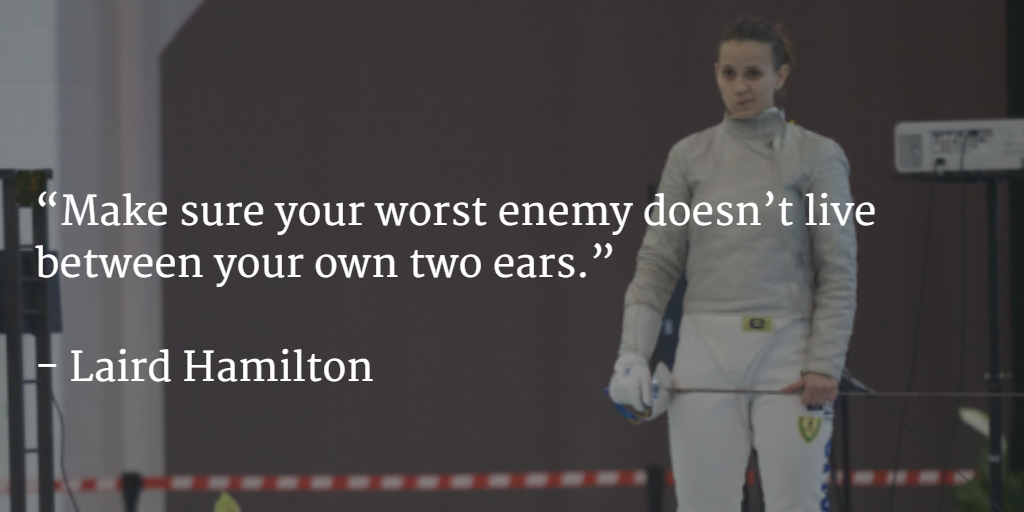 Now that the season is kicking back into gear, fencers all over the country are dusting off their weapons and suiting up for another season. This season in particular holds pinnacle importance as the Olympic hopefuls learn of their fate for going to Beijing. But whether you are a nationally ranked fencer or you have just started taking classes, it is apparent that most fencers are drawn to the sport because of the mental workout.

Joseph Mitrani of Bay Harbor, a youth fencer who was interviewed for an article on Summer Nationals in The Miami Herald, took note of the mental side of fencing (Cassola, 2007). He said, “I like the strategy, speed and mental aspect of it all.” His father, Raul Mitrani, also noted, “Fencing develops mental and physical preparedness.”

Just as there are endless amounts of bladework drills, there are many types of mental skills to learn. Don’t be overwhelmed by wondering where and how to begin. There are some mental skills that are more essential than others. This quick list is a great place to get started. It outlines the top ten mental errors commonly made by most fencers. The next series of articles will provide you with details on each one.

1) Not being able to Concentrate.

Focus is a huge part of fencing.  Given that fencing isn’t the only thing in your life, being able to concentrate can be a huge task.  If you can learn to concentrate on fencing when you are fencing, and not be distracted by other things, then you are on your way to increased success.

Lots of fencers get distracted by trying to fix things that they have absolutely no control over. What they don’t realize is that they could channel their energy towards solving their problem by focusing on what they can control.

This can be done in two ways: expecting to win or expecting to lose. Both can be bad. Learning to fence without expectations can free you from the pressure you put on yourself to win, or not lose.

Failing to prepare is preparing to fail. Developing a game plan is a critical part of any competitive fencer’s training. It can make a huge difference in your competitive results.

5) Not having confidence in your game.

Fencers without confidence tend to believe more in their doubts than their own abilities. The truth is confidence is how you think, what you focus on, and how you react to situations. Confidence has very little to do with success or failure.

Fencers tend to overdo it and not plan out their training. It is also common for fencers to “cram” their training right before a tournament. This reflects poor planning of their season.

7) Worrying what others think.

Some fencers are oftentimes bogged down by what their coach, parents, and/or teammates may think of them. We tend to put enough pressure on ourselves; pressure from others usually isn’t helpful.

8) Not having a pre-performance routine.

Training involves not only the preparation you do leading up the tournament, but also what you do the day of a tournament.

9) Letting your emotions get the best of you.

This is much easier said than done. Fencing is a highly cognitive sport, which can stimulate how you feel about certain situations and certain people. Whether you feel anger, sadness, or frustration, losing control of your emotions can unintentionally add obstacles to achieving your potential.

10) Letting fencing define who you are.

There are plenty of fencers who think of themselves as a fencer first, and a person second. This can be a problem when they fall short of their self-inflicted expectations. They may think of themselves as a failure, even though they failed in fencing in a temporary way. Fencing is just one aspect of our lives. Learning that you are a person who fences, rather than being only a fencer, can be a tough, but important, step.

This list highlights some of the most common mental errors that fencers make. The next article in the series will discuss worrying about non-fencing life while fencing.

Want to learn a bit more about mental training and sport psychology? Check out the following:

3 Things I Learned from Winning Ugly

Psychology of the Team Game