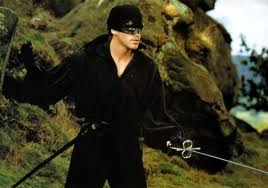 We’ve just been reminded that it is International Talk Like a Pirate Day.  Now that usually means that you go around annoying people with calls of “Ay Matey” or “Arggh!” or “Where’s me booty?!” but here at FdN Corporate we’re still talking normal – more Dread Pirate Roberts and less Captain Hook.

Still, our favorite movie blog, Banana Oil Movies, posted their thoughts on the best Pirates to grace the silver screen (and now DVD and Netflix enabled home theatre systems) and while we agree, there are a couple more obscure pirates we’d like to point out.

The short film that starts off Monty Python’s Meaning of Life.  This is the tale of a rag tag band of tax actuaries who rebel against the evil overlords of the Very Big Corporation of America.  The pirates also show up sometime in the middle of the film to reprise their role.

This 1981 movie is also directed by Python’s Terry Gilliam and features members of Monty Python in this tale of a band of pirates who travel through time to acquire lost treasures.  Along the way we get to see performances by Ian Holm (Napoleon), John Cleese (Robin Hood), and Sean Connery (Agamemnon).  If you have an inkling to see it, you can watch it on demand for free using Amazon Prime via this link and streaming via Netflix.

Since much of today will have you looking at the classics like Captain Blood or Treasure Island or newer series like Pirates of the Caribbean we won’t talk about those.  Everyone else is talking about them and you’ve probably already watched them a number of times.

Looking through the various pirate movies listed in IMDB I found one that I’m going to mention, simply because it made me remember this stinker of a movie and if I had to live through that memory, then I’ll inflict it on you also.

Yeah, that movie actually made a profit – 14MM on a 9MM budget.  Starring Robert Urich, the lead in Spencer: For Hire, this movie is about a time when water is very expensive and Urich is a space pirate searching out a fabled planet made of ice.  It has space ships and swords, and scores a whopping 11% at Rotten Tomatoes.

What are your faves?

Dig through this list of pirate movies on Wikipedia.  What are your favorites, your must sees, your groaners?  Can you top Ice Pirates for worst pirate movie ever?