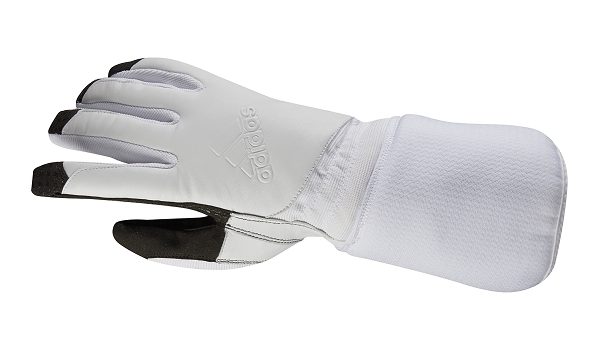 The Adidas Pro Combi Fencing Glove is Adidas’s first foray into the world of more specialized fencing equipment. Historically, Adidas made its name in the Fencing world from their shoes. For many years, they were the only real player in that space. They also got involved in uniforms, though it was mostly through re-branding AllStar/Uhlmann gear. Lately, though, they’ve launched a line of fencing uniforms that went beyond simple re-branding. And the Adidas Fencing Glove represents the start of that move into more complete product ownership.

The glove is produced by AllStar and generally resembles a number of other gloves that AllStar carries. However, its construction and features are notably different. Some of the more notable differences in particular:

The durability of the glove seems to be outstanding. We’ve included a short gallery of photos of our test glove. After 1 year of roughly 3 days a week usage in both foil and epee, the glove is still structurally intact and fully functional to approximately the same level of quality as when it was acquired. It looks a little rough for wear, but its worth noting that the appliques are still mostly intact and there are no major holes or heavy wear spots forming. It feels like it will go another year.

Most of the downsides with the glove are going to be personal preference related. Will you like the velcro enclosure closing up, which results in your body cord exiting the glove upwards? Will you like the palm heel padding? Will you like the other padding choices on the glove? We found that all of these were initially slightly annoying, but that over time, they became non-issues when compared to all of the other things that were done objectively well on this glove.

The only objective major functional issue that we had with the glove is the tag. Its positioned in a way that it will always get in the way of the velcro sealing of the glove. Annoying, but we solved it quickly by just cutting the tag off.

And of course, the price. It’s certainly a little more expensive than your standard starter glove. As with most of Adidas’s offerings, the Adidas fencing glove is positioned at the top of its class. 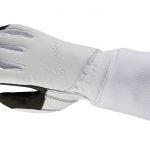 Adidas Pro Combi Fencing Glove
Durable and Innovative
While it is one of the more expensive gloves on the market, the Pro Combi Adidas Fencing Glove makes up for things in durability and innovation. It might not be a glove that everyone likes due to some of the smaller changes, but all of the changes are generally subtle and palatable. Those subtle changes drive innovation and move fencing gloves forward. If you're in the market for a new glove, this glove is definitely worth at least a test run.
Reader Rating1 Vote4.6
Pros
Durability
Innovation
Style
Cons
Price
9
9
Where to Buy
Fencing Post - $48 ($60)
Blue Gauntlet - $58
Absolute - $45 ($58)
Share:
Previous Post