The Nike Air Zoom Fencing Shoe, previously known as the Nike Ballestra Fencing Shoe, is the first and only dedicated fencing shoe created by Nike. It was originally release in conjunction with the 2008 Beijing Olympics. Nike was the official Beijing Olympics team outfitter for a number of countries, including the US. They underwent an extensive research and development effort for footwear across every sport [1]. You can read our in-depth interview with Sean McDowell, the Creative Director for Nike’s Olympic Footwear in our First Look at the Nike Fencing Shoe article. You’ll get the distinct impression from the interview and from the video below about the making of the shoe that Nike went through great lengths to create the best possible fencing shoe.

And by all accounts, they succeeded. By whatever name you call it, Nike’s Fencing Shoe is regularly hailed as the best fencing shoe on the market. Even now, more than 8 years later, no one has produced a shoe of higher consistent quality. If you are and adult and are looking for a fencing shoe that will check all the right boxes, this is the one for you.

The shoes are particularly durable. Nike designed the shoes to last approximately 1 year under a normal practice load. But most people get significantly more mileage than that out of their shoes. It seems Nike might’ve been testing their product on a competition strip that was extra rough. The instep is made of a particularly durable synthetic material, making it difficult to wear holes in the shoe when rolling an ankle on the lunge. The shoelaces are inset so that they won’t wear as easily, as well. And unlike most other fencing shoes, the Nike shoes come in a multiple number of colorways. More recently, the market has settled around approximately 5 color combinations, you can probably still find a handful of the older colors on eBay or on the Trading Post section of the Fencing.net Forums. And because the colors are customizable, there’s always a chance that we’ll get some new options in the future.

As good as it is, though, it still has some issues. The main one is price. The reason I mentioned “adult” earlier is because the $175 price tag makes it perhaps a little unreasonable to buy for younger fencers who are still growing. Dropping somewhere in the neighborhood of $200 every time a shoe size changes isn’t sustainable for most people. Other complaints include unfavorable comparisons to fencing shoes of the past. Perhaps the most common complaint I’ve heard is that for shoes to truly be the best for fencing, they need to be asymmetrical, calling back comparisons to the old Adidas Asymmetric Fencing shoes. But those shoes are gone and Nike’s shoes are still here. 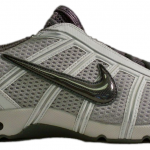 Nike Air Zoom (Ballestra) Fencing Shoes
The Gold Standard for Fencing Shoes
When the Nike Air Zoom came onto the market many years ago, it was the best fencing shoe the market had ever seen. Fencing was researched and a shoe carefully produced by Nike. Today, its still best-in-class, a modern classic that is simply hard to top except by the most well-produced alternatives - and even then, which shoe is "best" is debatable. Either way, the Nike Air Zoom is still the shoe you compare all others against. And the price you pay reflects that.
Reader Rating31 Votes5.5
Pros
Innovation
Durability
Lightweight
Stability
Color Selection
Cons
Price
9.5
Where to Buy
$179 - Absolute
$178 - Leon Paul
$179 - APS
Share:
Next Post