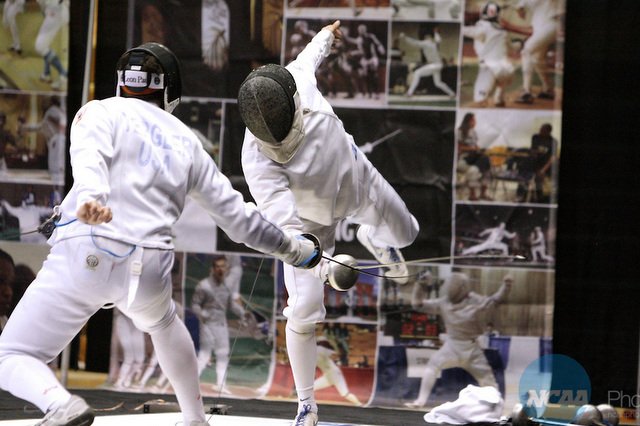 First and foremost, congratulations to 143/144 who qualified for NCAA championships. It’s a tough field every year, and the act of qualifying is a monumental accomplishment in itself. Doing these predictions is never easy, and so I’ve brought in my pals Hannah Provenza and Graham Wicas to help me predict the field!

For those unaware of the format, the tournament is divided into six events: Men’s Epee, Men’s Foil, Men’s Sabre, Women’s Epee, Women’s Foil, and Women’s Sabre. Each event is comprised of 24 competitors who fence each other in five-touch, round robin format over the course of two days. At the conclusion of the round robin fencing, the school that has earned the most victories will be the NCAA team champions.

Once the round robin is complete, the top four fencers in each event compete in 15-touch single elimination bouts for the right to be crowned NCAA individual champion. The individual title is independent of the team championships.

My predictions cover the fencers I believe will be in the top 3 of each event, and my overall national champion predictions. For Graham and Hannah’s predictions, see the above spreadsheet:

I’ll be posting my daily quick hits on Fencing.net. Enjoy the predictions.

I must have changed my predictions four or five times before settling on the above. Ultimately, I picked Ro due to his unwavering consistency in five touch bouts and his stalwart focus in elimination matches. When I watch Ro, he never ceases to amaze me. Whether it’s his speed, freakishly good point control, or his deceptively strong blade takes (despite the use of a French grip), my gut tells me that he’s going to win.

Boyadzhiev, I pick for the final with little hesitancy. His confidence on the strip has been great this competitive season, and I’ve watched him at NACs this year with great interest. Had he not squandered a large lead against Alen Hadzic two years ago, he very well could have been NCAA champion. I think he’ll return to the tournament with newfound focus.

I had picked Eldeib to win initially, and I have no doubt he will one day. His long lunges, ability to apply constant pressure on his opponents, and experience at high level competitions will transfer over well to NCAA’s.

This final was the easiest to predict. With the wealth of experience the two products of Greg Massialas have, it’s hard to place anyone but these two in the final. It’s rare to have an American fencer be ranked #1 in the world, let alone have a #1 fencer in the world completing in NCAA championships. With the season he’s had, I expect Meinhardt to make up for his fluke last year, in which he gave up a 12-6 lead on a resilient Massialas to ultimately lose 15-13. These two will put on a good show again, I have no doubt.

Anyone from 2013 Champion Mike Mills, Will Spear, Ferenc Valkai, or Alex Ryjik could make the top four and I wouldn’t be surprised. The Men’s Saber field is ultra-competitive and should come down to a few bouts (even touches). I’m going to go with the physically gifted Sydorenko here, in a narrow win over 2013 silver medalist (and now Penn from Penn State transfer) Shaul Gordon.

You may remember Shaul Gordon from the upset win over Daryl Homer last year. One saber fencer, who wished to remain anonymous described Gordon as “…a ‘grade A’ mindf*** on the strip. He plays with the distance well and hits you in multiple variations of the distance. I hate fencing him, but I respect the hell out of him.” When you’re a “mindf***,” you go far at NCAA’s (see Badger, Peregrine).

Kat Holmes is a fighter who outworks her opponents both physically and mentally, and with great consistency. If epee were a mixed event, I would actually pick her to win, and I’m not joking one bit. Holmes’ international experience this year, strong conditioning, and consistency will carry her to her long awaited NCAA championship win.

Despite a fifth place showing at ivies, I expect the imposing Isabel DiTella to put on a show at NCAAs. She’s a strong athlete, fun to watch, and can seemingly cross the length of the strip in an advance lunge or two.

Kong came out of nowhere last year to make NCAA first team All-American before losing to 2012 Olympic Bronze medalist Susie Scanlan. If Kong’s not in the top 4, then her Stanford teammate Francesca Bassa surely will be.

Lastly, I’m going bold here and picking Radanovich to sneak into the top. Looking at her results in NCAA and USFA events this year, five touch bouts appear to be Radanovich’s strong suit. But, predicting any epee event is like trying to predict the FIE rules committee. It will result in failure.

Funny enough, these are my exact same picks I had last year. Hard to go against Lee Kiefer here, the reigning champion, despite the historical season from Jackie Dubrovich. Should Maddy Zeiss sneak her way into the gold medal bout, it would be no surprise. Zeiss, who her teammates refer to as “Maddy Ice” does seem to have ice in her veins. When she builds momentum on the strip, it’s hard to crush it, and she has amnesia when it comes to poor bouts/failed touches.

I don’t know jack squat about Women’s Saber, but I do know that Adrienne Jarocki is a fundergunst bazooka. Selecting her as my NCAA Champ prediction was a no brainer.  Zero losses in the final pool at regionals. Zero losses at Ivy League championships. Jarocki is having a beastly season, and she’s peerless in this field.

Yup, that’s all I’m writing about, because I don’t know anything about women’s saber and I had to go to my saber friends and steal their predictions. Godspeed.