NCAA Fencing Round Up – Day One 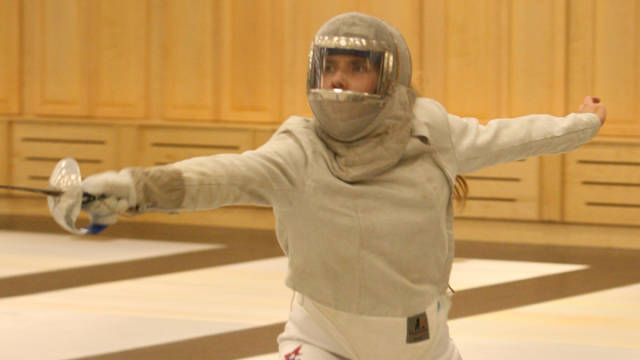 Princeton leads the NCAA field after the first day of fencing.

After day 1 of the 2014 NCAA Fencing Championships, Princeton holds a 4 point lead over Penn State for the top spot. Ohio State, Harvard, and Notre Dame round out the top 5.

Day 1 featured women’s bouts across sabre, foil, and epee and all of the leaders have 13 bout victories. Adrienne Jarocki (Harvard) leads women’s sabre with 13 victories over 15 bouts. Lee Kiefer (Notre Dame) and Jackie Dubrovich (Columbia) are tied at 13 victories in women’s foil, with Kiefer leading by 11 points on indicators (+41 vs +30). Stanford’s Vivian Kong leads women’s epee with 13 bouts and a +27 indicator.

Press from around the collegiate web:

Shaito family has two competing for national titles for Buckeyes

Scanlon, a senior at Princeton, is a three-time All-American. She has helped the Tigers win the Ivy League women’s championship each of those years. They won the school’s first national championship in fencing last year. She won a bronze medal at the London 2012 Olympic Games.

But three losses out of 15 women’s epee matches on the first day of the national championships left Scanlon in second place behind Stanford’s Vivian Kong and in her words, annoyed.

Stanford’s Massialas hopes to defend his NCAA fencing title
Stanford sophomore Alexander Massialas will get a chance to defend his NCAA men’s foil title as he joins six other Cardinal fencers who qualified for the national tournament, to be held in Columbus, Ohio beginning Thursday, March 20.

Irish In Top Five After Day One Of Competition

“The first day was very tough for everybody; very equal pools and very even competition,” head coach Janusz Bednarski states. “We are fighting, but it is still in the beginning.

The competition was held at the French Field House at Ohio State University.

Dubrovich, the 2013 silver medalist as a first-year, picked up right where she left off. Her 13-2 record put her into a tie with Lee Kiefer of Notre Dame, who also netted 13 victories. Dubrovich’s fellow Columbia foil fencer, first-year Sara Taffel, acquitted herself well in the tough field, with a 7-8 record.

Princeton is four bouts ahead of Penn State and seven in front of Ohio State.

Stanford’s Kong Leads After Day One

COLUMBUS, Ohio – Sophomore Vivian Kong and senior Francesca Bassa are in a good position following the first day of competition at the NCAA Fencing Championships in Columbus, Ohio.

Kong leads the women’s epee through the first three of five rounds. She won 13 of her 15 bouts to lead all competitors in the 24-person field. She had one more win than Princeton’s Susannah Scanlan and Penn State’s Jessie Radanovich. He also led in fewest touches allowed with 43.

Damien provides his thoughts from day 1 of the NCAA Fencing Championships and recounts his predictive skills for Fantasy Fencing.


(Columns from Men’s Foil and Men’s Sabre are not yet published.)

Fencing in College - How to Get on an NCAA Fencing Team