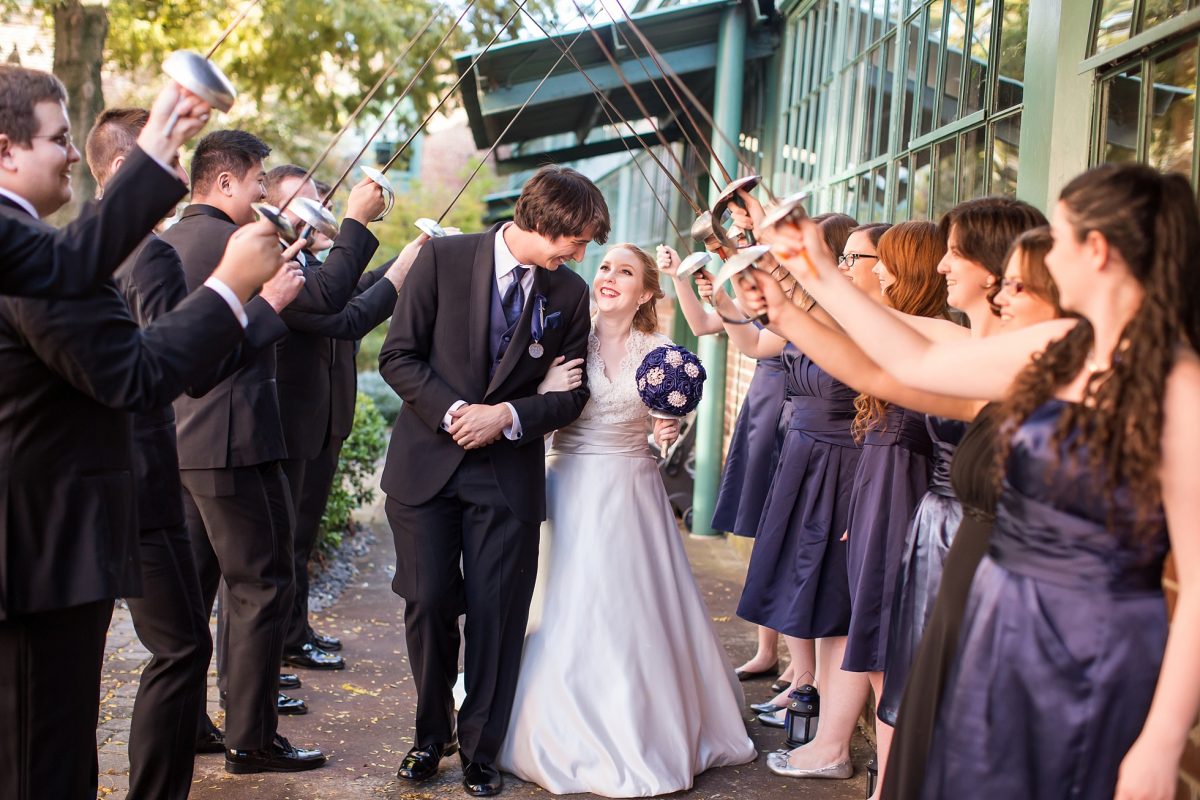 Eric and Lauren are fencers that I know from meeting them in Atlanta. This past year they got married and their wedding photographer reached out to me with these photographs from the wedding that incorporated a fencing theme. Thanks to Claire Diana Photography for the write up below and the amazing photos.

Lauren & Eric met in 2010 while on the Georgia Tech fencing team.  Eric always made sure that Lauren had a ride across campus, and they eventually realized they had a lot of similarities being, as Lauren put it, “nerdy only children.” :)  They chose to get married at The King Plow Arts Center just a few minutes away from their alma mater, the Georgia Institute of Technology, and they used Tech’s navy blue & gold as their wedding colors.  Their wedding was the night before Halloween, and they both love dressing up, fantasy, & sci-fi (Dragon*Con and Halloween are their two favorite holidays), so they decided to make their wedding celebrations “Midnight Masquerade” themed.

Lauren & Eric wanted their wedding to be unique & personalized, so they chose to write their entire ceremony script, and they kept it fencing-themed as they feel the sport is a good analogy to their relationship.  Their officiant was their mutual best friend and the captain of the fencing team.  Lauren made her grand entrance into the ceremony to “Across the Stars” and exited to “The Throne Room,” both very iconic songs from Star Wars.  During the ceremony, Lauren’s maid of honor read a compilation of Harry Potter quotes (Lauren’s favorite book).  Eric’s best man read a quote from Firefly, a sci-fi series that the couple both loves.  Instead of sand or a candle to represent unity, Lauren & Eric chose to use locks and to lock each other’s to symbolize the permanence of their union.

I love how DIY this wedding was, and the amount of detail Lauren & Eric put into the day is magnificent.  Lauren made medallions instead of boutonnieres for the groomsmen and grandfathers. While the groomsmen had Zelda swords on their boutonnieres, her dad had a Rebel Alliance symbol from Star Wars, as he was the one who passed down his love of sci-fi to Lauren.  Lauren also made her own bouquet with ribbon roses and broaches.  The handle of the bouquet was actually a hilt from the type of fencing sword she fenced.  Eric, being a mechanical engineer, 3D printed his own mask!  Instead of bouquets, Lauren’s bridesmaids all carried unique lanterns that Lauren had decorated.  Lauren & Eric love playing board games, so during the cocktail hour they had blank playing cards at each of the tables, and told people to write relationship advice on the red cards and date ideas on the blue cards.

The reception was decorated to fit the masquerade theme, with masks on each table, and a photo booth to capture the fun people had dressing up.  All in all, it was by far the most unique wedding I’ve ever photographed, and I couldn’t be happier for the newlyweds!