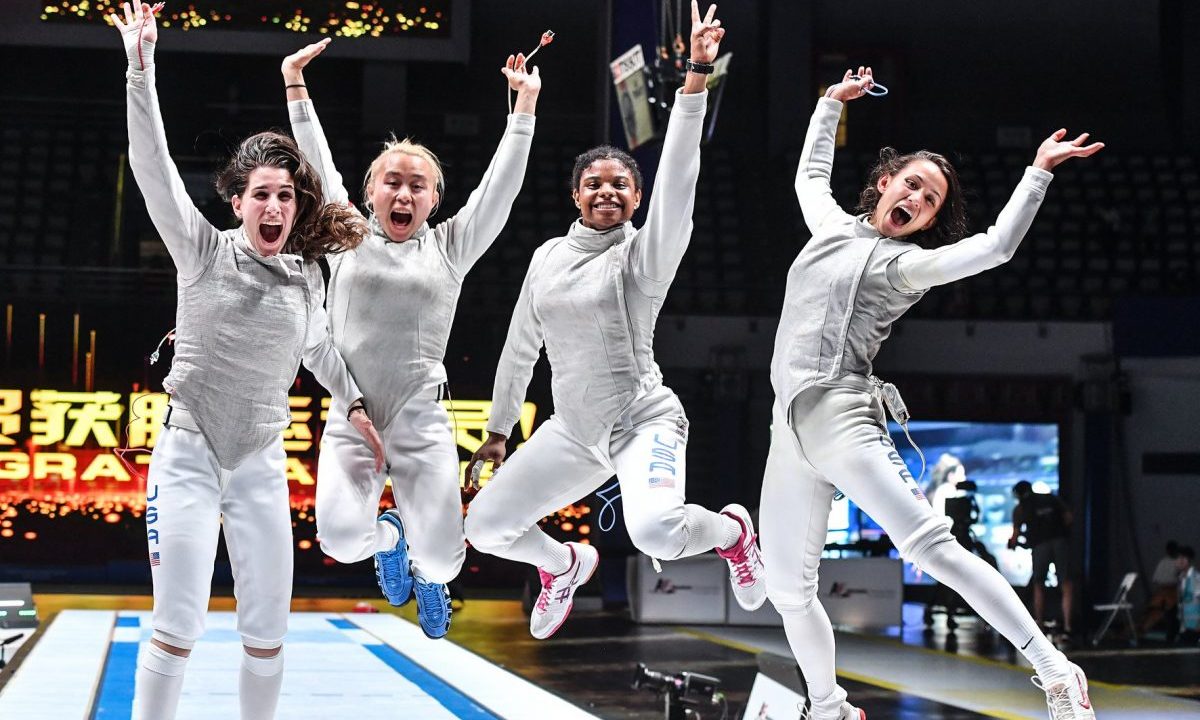 USA’s women’s foil team have made history in China, reversing the result of last year’s final in Germany by defeating Italy and claiming the United States first ever senior world championship team foil gold. In the men’s team epee, Switzerland achieved the same feat, surprising most by defeating Korea in their final.

Awarded the bye into the Table of 16 as the third seeded team behind behind Italy and Russia, USA’s women, anchored by world number three Lee Kiefer, ended up dominating the field to win the United State’s first ever team foil gold at this level.

Despite Italy’s team including the individual world champion at this meet, Alice Volpi, as well as two-time world champion Ariana Errigo, they were no match for the Americans, going down 45-35 in a match that turned on its head. That scoreline was as close as anyone came to the US team, who comfortably saw off Korea in their semifinal (45-22) and Canada (45-19) in the table of 8.

In the final, while it was the Italians who lead after the first three bouts 15-12, Nzingha Prescod from Brooklyn, New York, turned the match around in style, going 8-1 against Camilla Mancini in the fourth bout to establish a lead the Americans never lost.

Announcing the win on their official Instagram account, US Fencing captioned an image of the team: ‘World Champions!!! Meet the first U.S. Foil Team ever to win Senior Worlds! @nicoleross_usa @margaret_lu @nzinghap @leetothekiefer’

Speaking to FIE’s Fencing Channel straight after the victory, team member Nicole Ross described the hard work and discipline that had gone into the win. “We’ve been working so hard for so long for this,” she said, “and it’s so special to do it together. Usually we have matches where we’re less disciplined but tonight we just stuck to our plans, kept talking to each and believing in ourselves and it paid off.”

Notably, 2nd-ranked Russia failed to medal, losing out to Korea 38-40 at the quarterfinal stage. The result is another disappointing one for world number one foilist Inna Deriglazova, who also failed to medal in individual competition.

In the men’s epee, Switzerland navigated a tough road to the final, overcoming Italy after an epic overtime bout (36-35) in the quarterfinal, a French team anchored by newly crowned world champion Yannick Borel, (45-38) in the semi, and finally, in the gold medal match, a Korean squad containing current Olympic champion Sangyoung Park, 36-31.

It was the country’s first gold medal of any kind at world championships and the crowning moment for this team, who have been on the odium at each of the last three world championships. The final went right to the wire, with 29th-ranked veteran, Swiss anchor Benjamin Steffen, fencing the bout of his life to out touch Park 11-7 and ensure the victory. Understandably, he and his team were elated after the win.

“We went into every match and we knew we had to be very disciplined,” said Steffen, “and it’s the pressure that you feel every time and its such a relief when you get that victory, like now. But today we are the world champions and no one can that away from us.”