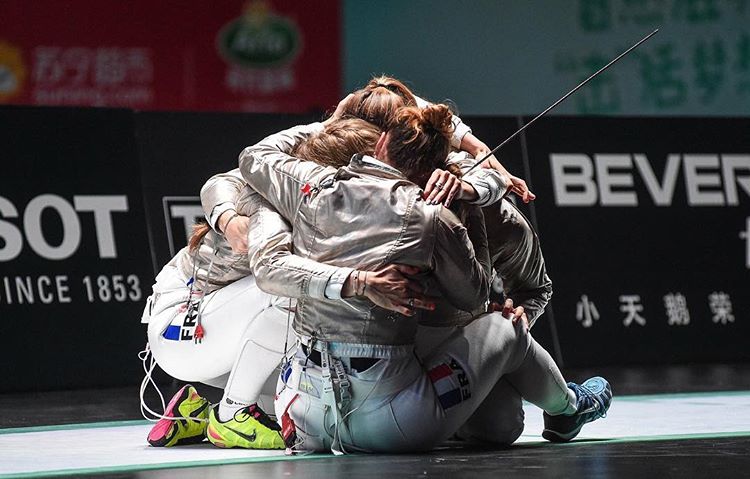 Italy and France have wrapped up nine days of world championship fencing in Wuxi, China, by winning gold in the men’s team foil and women’s team sabre.

Anchored by world number 4 Cecilia Berder, it was she who put the French in control after the second bout against Pozdniakova. By winning that 5-1, she established a lead that the Russians were unable to overcome. When she extended it again by winning 5-0 in the fifth against Egorian, any doubt of French victory was removed. Her teammates in the final Maron Brunet and Caroline Queroli also played their part in defending their advantage, ensuring the 45-35 win.

Brunet took to her Instagram account to celebrate, ‘My team ♥ thank you for this absolutely extraordinary day girls. We start again when you want 😜’.

Silver for Russia’s Velikaya took her personal tally of team world championship medals to nine, on top of the five individuals that include two gold. To reach the final, they took out Italy by the narrowest of margins in the semi, (45-44) after Velikaya herself claimed it in overtime once Italy had come from behind to make it level.

In the men’s foil, Italy defeated a valiant USA team who ultimately couldn’t match the dream combination of individual world champion Alessio Foconi, 2016 Olympic gold medalist Daniele Garozzo and 2011 world champion and 16-time World Cup event winner Andrea Cassara. The trio went behind briefly after the world number 1 going into these championships, Race Imboden, took a 6-4 win over Garozzo, but after Foconi put them back in front after a 5-1 against Alexander Massialas in the crucial fifth bout, they made sure they were never headed again, defending and stretching their lead to finish on 45-34.

“We didn’t have a strategy,” Andreas Cassaras told the FIE’s Fencing Channel after their win, “because it was a very difficult season with the Americans winning five World Cup events in a row…however we won the world championship last year, so I think our mentality was better than them and we fenced very well.”

To reach the gold medal match, the USA out-fenced a strong Russian team who had lead 15-9 before 2013 individual world champion Miles Chamley-Watson unleashed an 11-1 tirade on Timur Arslanov in the fourth bout to completely switch the momentum of the match. With the Russians forced to search for touches, the Americans were able to stretch their lead and close out the semi 45-29. In the other semifinal Italy were too strong for Korea, even without the legendary Cassaras who was rested. Leading at every change, they were comfortable 45-29 winners to advance to the final against the USA.