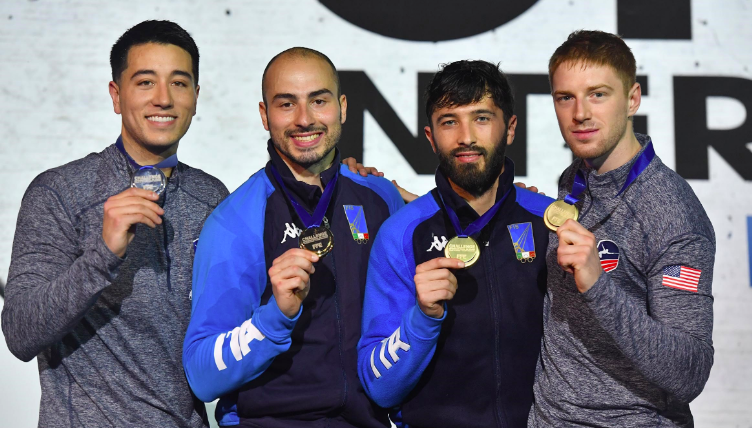 Italian world champion Alessio Foconi has defeated USA’s Gerek Meinhardt in the final of the first men’s World Cup foil event of 2019 in Paris, while Russia was too good for Italy in the teams.

2018 world champion, Alessio Foconi has returned to form at the opening event of 2019, the Challenge International de Paris (CIP) Men’s Foil World Cup, taking gold after beating both Race Imboden and Gerek Meinhardt in the semifinal and final by 15-12. It meant the Italian defended his title from last year, and claimed his first international gold since his world championship victory in China.

It was a familiar podium for all four medalists, with each having performed well here over the last several years. For beaten Italian semi-finalist, Giorgio Avola, who defeated Olympic champion Daniele Garozzo in the table of eight, it was his fourth bronze at the Paris event, having won silver there in 2011. For Meinhardt it was his third medal at the event (bronze in ’16, ’17) and for Imboden his fourth (gold in ’15, ‘16 and bronze in ’12).

“The final was very difficult,” Alessio told FIE’s Fencing Channel. “I was leading the bout 10-5 but Gerek managed to even the score. Then I was winning 12-10 and although it was extremely difficult, I managed to win. I’m extremely happy.”

3️⃣ medals in one weekend! The U.S. Men’s Foil Team won its SEVENTH straight team medal at the #CIPFleuret, taking bronze today and remaining No. 1️⃣ in the world after @gerekmeinhardt and @race_imboden won silver and bronze yesterday. 💪 PC: Augusto Bizzi