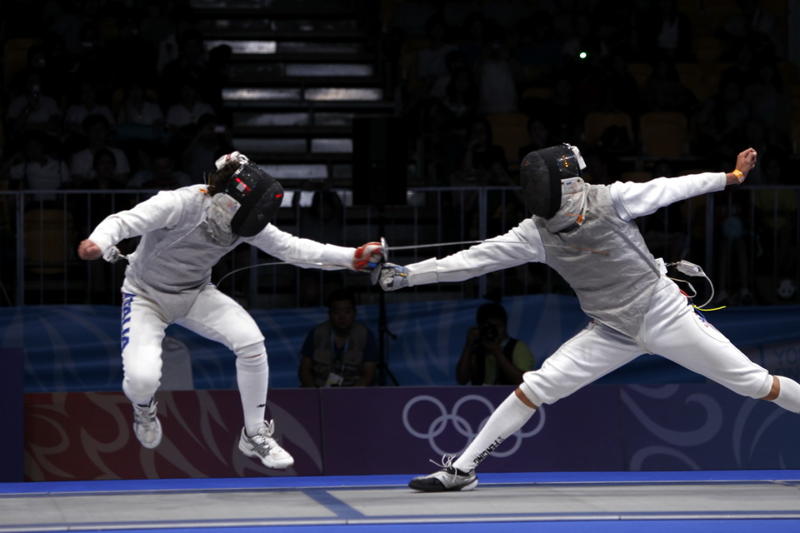 Men’s Foil and Women’s Epee are featured in the third day of fencing at the 2010 Youth Olympic Games.  The following photos were taken by Serge Timacheff of FencingPhotos.com.  Full galleries will be available in one to two weeks after the conclusion of the event. [Full Story]

Alexander Massialas (USA) took the silver medal, falling to rival Edoardo Luperi (ITA) in the gold medal bout.  This bout may be the start of a long rivalry between the two fencers as Massialis defeated Luperi in the finals of the 2010 Cadet World Championships earlier in the year.

“I’ve fenced [Luperi] once individually and once in team before,” Massialas said. “We’ve always been around each other, we know each other pretty well. We’ve been competing with each other for at least a few years now. He’s young, I’m young, and we’re both striving to do the best and make the Olympic team.”

Katharine Holmes (USA) narrowly missed out on a spot on the podium as she lost in the semi-finals to Alberta Santuccio (ITA) 9-8 and then lost to Martyna Swatowska (POL) 15-9 in the bronze medal bout.  Lin Sheng (CHN) won the gold medal bout against Santuccio.

“Today Katharine really didn’t fence the best that she could have,” said U.S. National Team Coach Sergey Isayenko. “But she did well, and she overcame situations throughout most of the pool. It was a tough pool, and she came through. I was very proud. She fought really hard.”