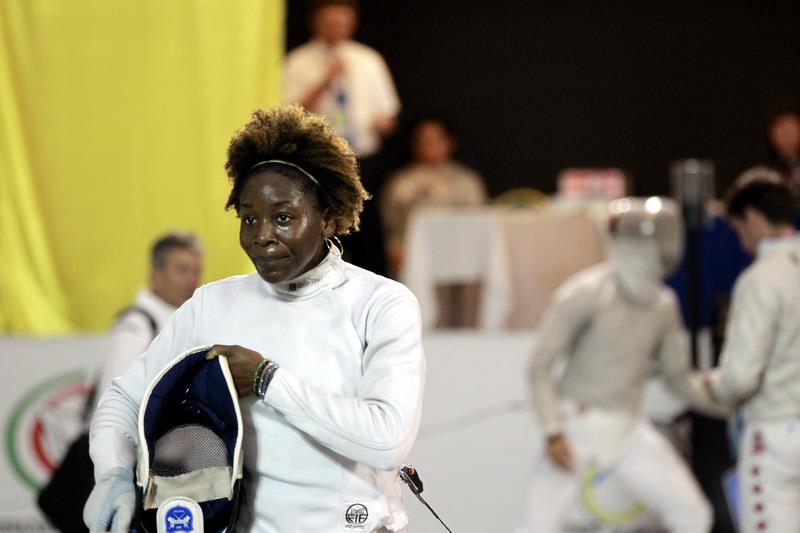 Some would say living in France for the last six years would be crazy, but not Maya.  She has lived an exciting life over that past half-dozen years:  training with some of the best fencers in the world, traveling across the glove; all to pursue a dream.  That is a priceless experience.  Fencing.net caught up with Maya as she was preparing for her final push before the Olympics.

KM: So everything has finally paid off for you since you moved to France!

I know!  It is crazy!  It has been a long time coming and I am finally excited that I made the team!

KM: What has your experience in France been like?

It has been a wonderful experience!  I moved there in 2007 because I got tired of going back and forth from NY to Europe every couple of weeks.  I know that there are men’s saber and foil team members who regularly go back and forth, but my body just couldn’t handle it.

So in 2007 I followed what my coach, Michel Sebastiani [past coach at Princeton], said, and I went to Paris to train and compete in Europe. There wasn’t anything holding me down in the States, so I took the opportunity to pick up my life and pursue my dream of fencing there.

KM: How do you support yourself while you are there?

Well the women’s team wasn’t getting much in the way of support for five plus years or so.  We would get $100 for competitions or something like that.  It was better than nothing, but it was still hard.

The first two years I was an assistant teacher in school.  The third year I did business English, which I hated!  Then I moved to doing private tutoring lessons which is what I am currently doing now.

KM: How do you fit the work in with your training schedule?

I am so glad that I took the opportunity to get my ESL Master’s so I could teach.  That has really helped me land jobs internationally, and when I finally come back to the states, I have a skill that I can use.

KM: When are you planning on coming back to the US?

I’ll take another year to train with Daniel Lavavasseur at his club / team “Escrime Sans Frontieres” (Fencing Without Borders).  I love training with Daniel!  He is an absolute genius!

He is a level three Maitre [highest level] from France and he was the French men’s epee coach during the 80’s when they went on a huge run of medals.  He has Olympic gold medalists and World Champions.  He is a simply amazing coach!

He was at the Racing Club in Paris for a long time and then he opened up his own club in Saint Maur and that is where I have been predominantly training at.

When we travel to other countries for world cups, he recommends that we take in the museums and sights of the land so we are more rounded.  These are the things that we will remember and the friendships that we develop from these excursions.

There are athletes from around the world that train with him.  Some of the core non-French fencers are Nathalie Moellhausen (ITA), Sarra Besbes (TUN), Pauline Forje (CMR), and Amanda Simeao (BRA) who is still a junior fencer.  We even have Silvio Fernandez (VEN) who started training with us!

KM: Really?  One of our coaches, Eugenio Salas, who coaches at my academy (WFA), was on the Venezuelan team with him at one point in time!

That’s crazy!  Silvio had an awesome year!  He started training with Daniel and he went from somewhere around #32 in the world to where he is in the top 12 now.  It was incredible!

Yeah, it has been a tough quadrennial!  I had a chance of going to the 2008 Olympics in Beijing, but I injured myself at very inopportune times.

I was in Greece for the last qualifying event before the Olympics when I was fencing a Hungarian gal.  I was up by a touch in non-combativity time with six seconds left when I stepped back and I tore my ACL!  I was so angry!  All I had to do was survive for six seconds and make it to the top three of the event and I would have gone!

She beat me by two points the week before in the exact same situation so I really wanted to beat her!  So I didn’t make the 2008 Olympics and I had to rehab for nine months!  I hated all of the exercises!

KM: I guess that this is very common.

KM: There must be some sense of accomplishment since the US team knocked the French team out of the Olympics!  I guess some of Daniel’s philosophies of cross cultural trainings is paying off for some countries!

Yep, it is!  I know that I don’t want to show my face around Insep when I have an opportunity to train with the French Pentathlon team!

Here is the clip of Maya’s final touch against France’s Laura Flessel at the St. Maur World Cup.  This is where the US Team defeated France, which knocked France out of contention for the 2012 Olympics.