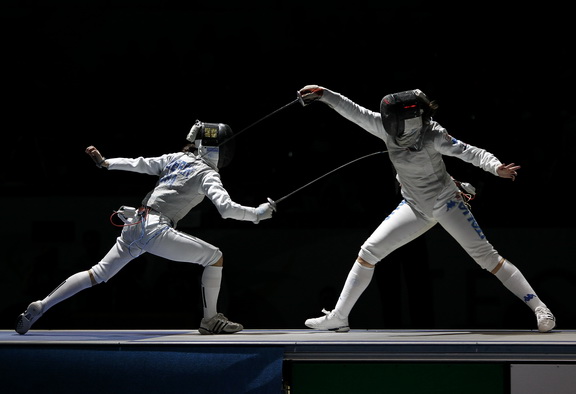 Video of the gold medal bout at the 2010 Cadet Women’s Foil World Championships. This bout features Lee Kiefer (USA) and Camilla Mancini (ITA). When watching this bout, pay attention to Kiefer’s use of preparation.

Lee Kiefer took gold medal in the Cadet Women’s Foil event, an event that 2010 Junior teammate Nzingha Prescod won in 2009.  In this bout, Kiefer uses a preparation in which her hand and point are held high on the initial step.

Depending on what Mancini does with the distance, Kiefer has several choice: continue with a simple attack, execute a disengage, take the blade to parry Mancini’s attack, or simply stop.

Training advice: Watch this video once through.  Then go back through the video and try to piece out the tactical choices being made by one of the fencers.  Think about how you can apply similar tactical thinking to your bouts and also about how you can use your favorite preparation to transition into different offensive, defensive, and counter-offensive actions.