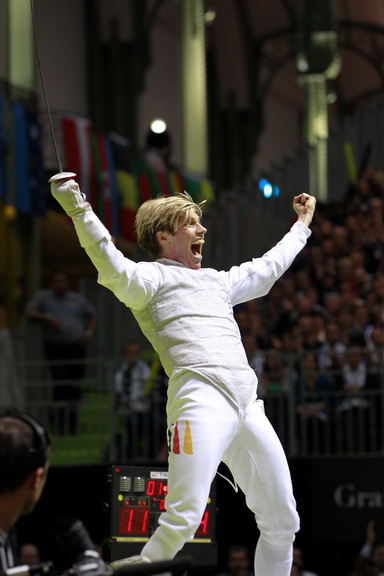 Meinhardt led one of the strongest men’s foil squads in recent history with 3 fencers seeded into the top-16 at the beginning of the day’s competition.  Alex Massialas fenced in the preliminary round and entered the second day seeded 32nd where he lost to Benjamin Kleibrink (GER).

Kurt Getz, who placed in the top-8 in 2009, defeated Carlos Rodriguez (VEN) but then fell to Jun Heo (KOR) 15-7 in the round of 32.  Miles Chamley-Watson posted victories against Bogdan Gurinenko (UKR), Peter Biro (HUN), and Alexey Cheremisinov (RUS) to make his way into the top-8.  In the quarter-finals Chamley-Watson fell to Lei (CHN) 15-10.