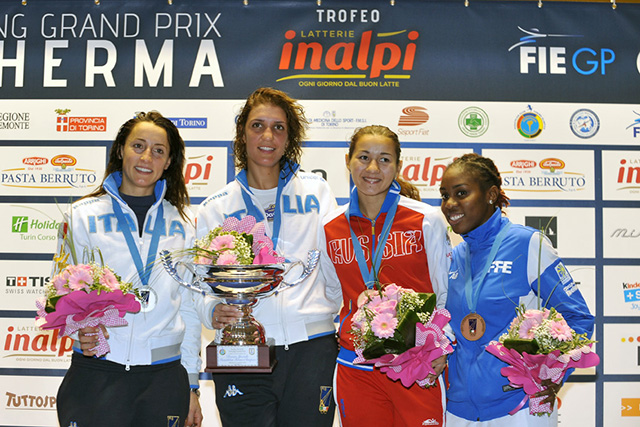 Arianna Errigo (ITA) won the initial Grand Prix of the FIE season, retaining her #1 world ranking by defeating teammate Elisa Di Francisca in the finals. In the top-8, Errigo defeated Jeon Hee Sook (KOR) 16-6, Anita Blaze (FRA) 15-4 and then in the finals posted a 15-7 score over Di Francisca.

Lee Kiefer led the way for the United States with an 11th place finish. Kiefer made her way to the top-16 with victories over Anne Sauer (GER) and Jacqueline Dubrovich (USA) before falling in the round of 16 to Malgorzata Wojtkowiak (POL) 11-10.

Italy took the top 2 spots and had 4 fencers in the top 10 as Martina Batini and Valentina Vezzali took 9th and 10th for Italy.

Italy won out the event, posting a commanding 45-35 victory over Russia in the final, which was the closest any team got to Italy all day.

Video for the Women’s Foil Grand Prix is available via the Italian Fencing Federation’s YouTube Channel. Here is their archived video feed of the Top-16: