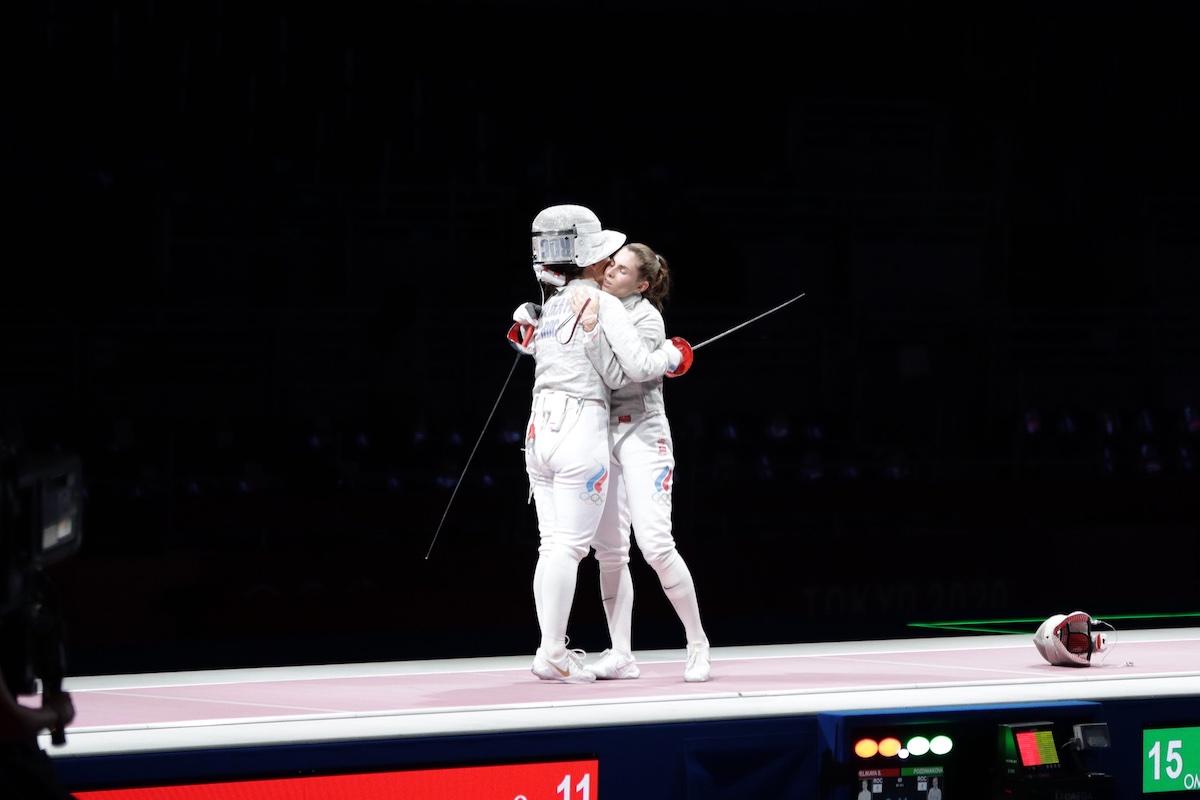 In an all-Russian Women’s Saber final bout, Sofia Pozdniakova defeated Sofya Velikaya – both women representing the Russian Olympic Committee. The bout was close up until 10-10, as the teammates know each other well, but Pozdniakova eventually broke away to finish the bout 15-11. Pozdniakova defeated Manon Brunet of France 15-10 to make the final round.

Pozdniakova is no stranger to the medal stand with a number of international Golds in her trophy case, but Velikaya, as world ranked #2, was favored to win the match. With this result, Velikaya has won the individual Silver at the past 3 Olympics in a row. Velikaya bested Anna Marton of Hungary 15-8 for the chance to fight for Gold.

In the Bronze medal match, Brunet solidly defeated Marton 15-6 in a bout that Brunet took an early lead in and was in full control of the entire time. While both fencers have historically ranked quite well on the senior points list, neither have consistently taken home medals from international competition. Brunet’s international success has historically largely been in the team event, with this Bronze being the best result of her career so far. Marton’s previous best result was a Bronze at the 2015 Moscow World Championships.

For Team USA, Mariel Zanunis fared best, going out in the round of 8 to Velikaya 8-15. Both women are deeply experienced 36 year olds with Olympic and World Championship medals under their belts. By the numbers, Velikaya was expected to win the bout as current world #2 to Zangunis’ #9, and Velikaya with a 57% win rate against Zagunis, but the pair have not fenced a single bout since 2016, so the result was certainly up in the air.

Team USA’s other two fencers both went out in the round of 32: Anne-Elizabeth (Eliza) Stone was upset 9-15 by Anna Bashta (world #36) of Azerbaijan, and Dagmara Wozniak lost to higher seed Olga Nikitna of the Russian Olympic Committee in a very close 14-15 loss and tight call at the end.

In an unexpected turn of events, the odds-on favorite and world ranked #1 Olga Kharlan of Ukraine lost her round of 32 bout to Yang Hengyu of China 12-15, destroying a number of fantasy brackets for the event in the process. Both in the Women’s Saber and the other event of the day, Men’s Foil, unexpected upsets cropped up everywhere.