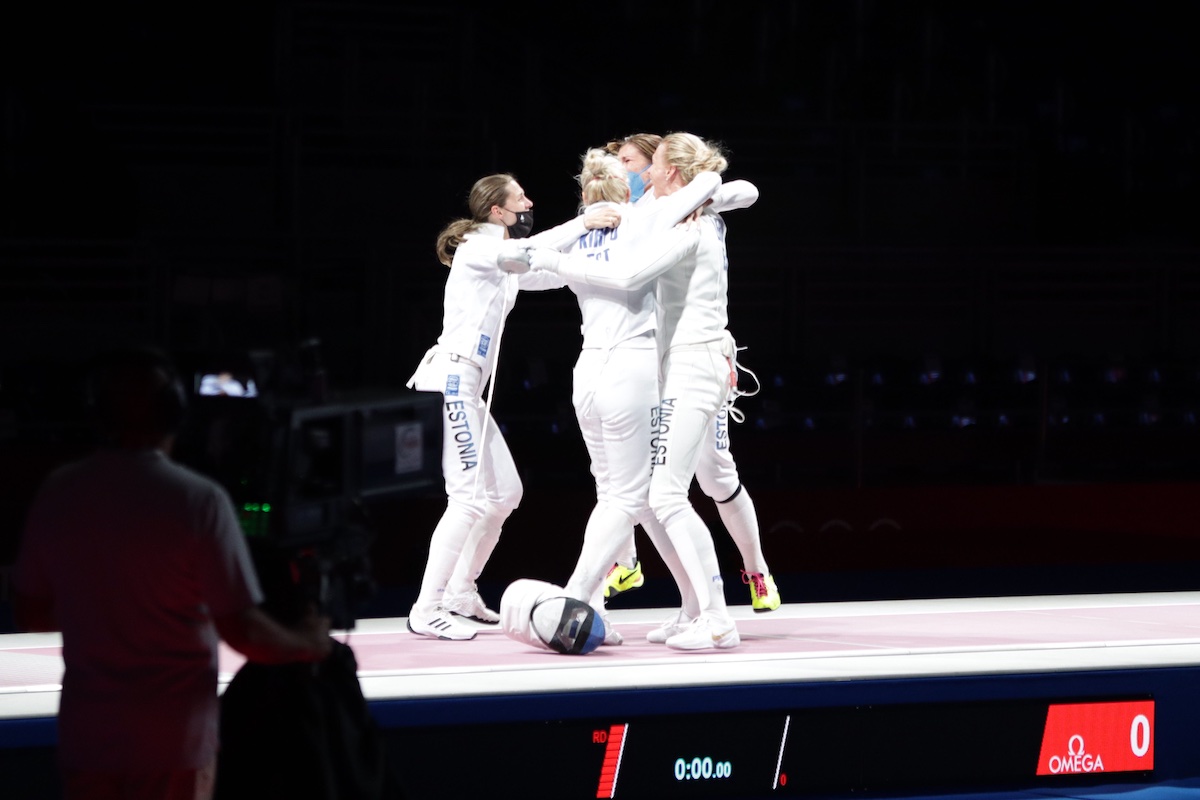 Estonia defeated South Korea by a score of 36 to 32 on Tuesday night at Makuhari Messe’s Hall B as the team events kick off at the Tokyo Olympics. Estonia’s team, comprised of Julia Beljajeva, Katria Lehis, Erika Kirpu and alternate Irina Embrich, came into the event as world ranked #7 having barely qualified it into the event itself, and despite having a very strong national Women’s Epee track record, their team event results have never quite matched their individual performances. This Olympic games have produces two firsts for Estonia – a first individual medal through Lehis earlier in the week and a first medal for the team performance here today.

Korea’s world ranked #4 team, Choi Injeong, Kang Young Mi, Song Sera, and alternate Lee Hyein, looked to capitalize on their increasingly consistent results, with all 3 members of their team in the top 11 in the world. The next closest team with that amount of consistency is China, at top 15. In falling to Estonia, they’ve earned their second team Silver medal (London 2012) and cap off a very successful season with a place on the podium.

The match itself was fairly evenly throughout – it was tied at 16-16 at the midway point of the match. For the 7th bout, both teams subbed in their alternates, who faced off against one another for the only bout either one was able to fence in the entire Olympics. The match entered the 9th bout with a still tied up score of 26-26, where Lehis took a late 1 point lead over Choi and managed to not only hold on but expand it through Choi’s rapid fire last seconds attempt to close the gap.

In the Bronze medal match, Italy defeated China 23-21 in a slow paced but active bout (only one P-card) that intensified in the last minute of play – but China was unable to close the gap in time. China, the world ranked #1 team, current reigning World Championship team, and odds-on favorite for a medal, underperformed expectations. This is Italy’s first Olympic medal in Women’s Epee since Atlanta 1996, the first year the event was held.

For Team USA, the day was even, but without any necessary upsets to get them into medal contention. The team, comprised of Kelley Hurley, Courtney Hurley, Katharine Holmes and alternate Anna van Brummen, came into the event seeded 5th and finished the event placed 5th. Team USA started the day with a 33-38 loss to eventual Silver medalists South Korea, and then defeated Hong Kong 42-31 and world #2 Poland 33-26 to finish the day strong. In their final bout against Poland, the US team subbed in van Brummen in place of Courtney Hurley for the full bout in order to officially grant her the status of Olympian.